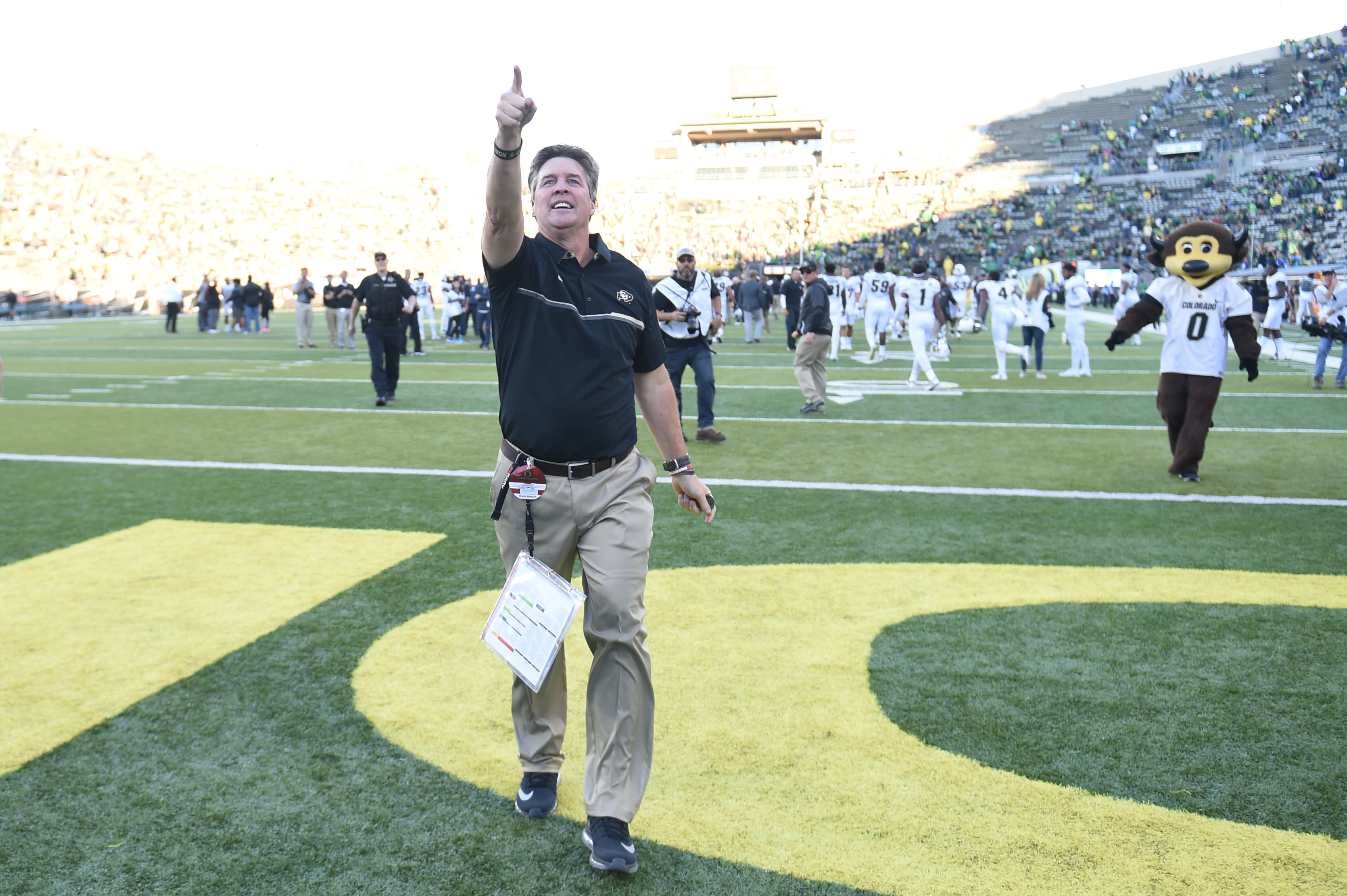 The Comeback’s college football preview coverage continues with the next team in our Top 50 countdown, the Colorado Buffaloes.

Admit it, if you’re aged 28 to 50, you longed for the days of yore when Colorado wasn’t a total laughingstock at football. It took a while for those days to come back, but last year the Buffaloes returned with a vengeance. Not many could have scripted a Pac-12 division title after three straight sixth-place finishes under the current regime, but coach Mike MacIntyre is now 2-0 in impossible situations, with San Jose State still being the gold standard no matter what happens at CU.

MacIntyre and staff parlayed the success into a top 30-40 recruiting class, depending on your service of preference, saw the attrition of success (defensive coordinator Jim Leavitt bolting for Oregon) and now faces the task of meeting expectations despite heavy losses along the defensive line and the heart, soul, and most talented part of the offense, quarterback Sefo Liufau. Enter D.J. Eliot moving in for Leavitt by way of Kentucky. The Wildcats’ defense saw marked improvement under Eliot, but the task is tall in Boulder to keep this machine humming.

Everything went as right as it could possibly go in 2016. As mentioned, CU had hung out in the division basement every year during the MacIntyre era, and then came 2016. Sefo Liufau was brilliant. The defense ranked in the top 20 nationally both in scoring defense and in total defense, giving up just a hair over 20 points per game and 340 yards. They achieved their first bowl game in a decade, winning their last six games of the season en route to a Pac-12 South division championship.

With that stunning success came the natural attrition that comes when you’re dormant for a long period of time and then rise out of nowhere. Coaches leave (Leavitt to rival Oregon), seniors graduate (Liufau, all three DL starters) and the challenge becomes restocking the cupboard on the fly to continue the momentum. Though the season ended with a drilling by Oklahoma State in the Alamo Bowl, in the grand scheme of things, on a 1-10 scale of success, 2016 had to be up in the 9.5 range.

Based on their success, CU was able to go a little big-game hunting in recruiting season, most notably pulling OT Jake Moretti, the top player in the state and one-time Ohio State commit to the program. KD Nixon, a speedy wide receiver who originally committed to Tennessee also came into the fold, indicating that CU’s success is being noticed by players across the nation, and they want to consider Boulder.

21.7 – This is the amount of points per game surrendered by the Buffaloes in 2016, good for top 20 in the nation. They will keep their 3-4 scheme, but heavy losses along the line could make this number difficult to achieve again.

17-25 – Through three different kickers, that was CU’s field goal make/miss rate, which will need to be better. It was 104th in the nation last season, which in close games is a complete liability. Davis Price and Chris Graham, who will compete for the job, were a combined 14-21.

1,745 – The amount of yards Junior RB Phillip Lindsay returns for Colorado, and he will be a key in keeping the offense humming. Lindsay is not only a workhorse, but a big play threat, notching a touchdown run of 75 yards and a touchdown reception (his only one last year) of 67 yards. He’s one of the most dynamic players in the conference and the team will rely on him heavily.

Record in the last five meetings: 0-5

Why it matters: Not only is this a rematch of the Pac-12 title game drubbing by the Huskies, it triples in importance due to the fact that it’s the rematch, it’s the conference opener for this season for both teams, and with a meek nonconference schedule, it’s the first real test the Buffs will have in determining just how much of that 2016 water might be left over in the 2017 till. Combine this with having to travel to UCLA the following week, and the Buffs could find themselves on the business end of trying to keep positive vibes going long enough to reasonably make a run at another division crown.

Record in the last five meetings: 1-4

Why it matters: From the first game of the conference season to the last, CU bookends their Pac-12 schedule with their most important games. It was a win in Folsom Field last year that propelled CU to the Pac-12 title game, and both they and Utah figure to be somewhere in the mix again this season. Might it come down to needing to fend off the Utes, again? 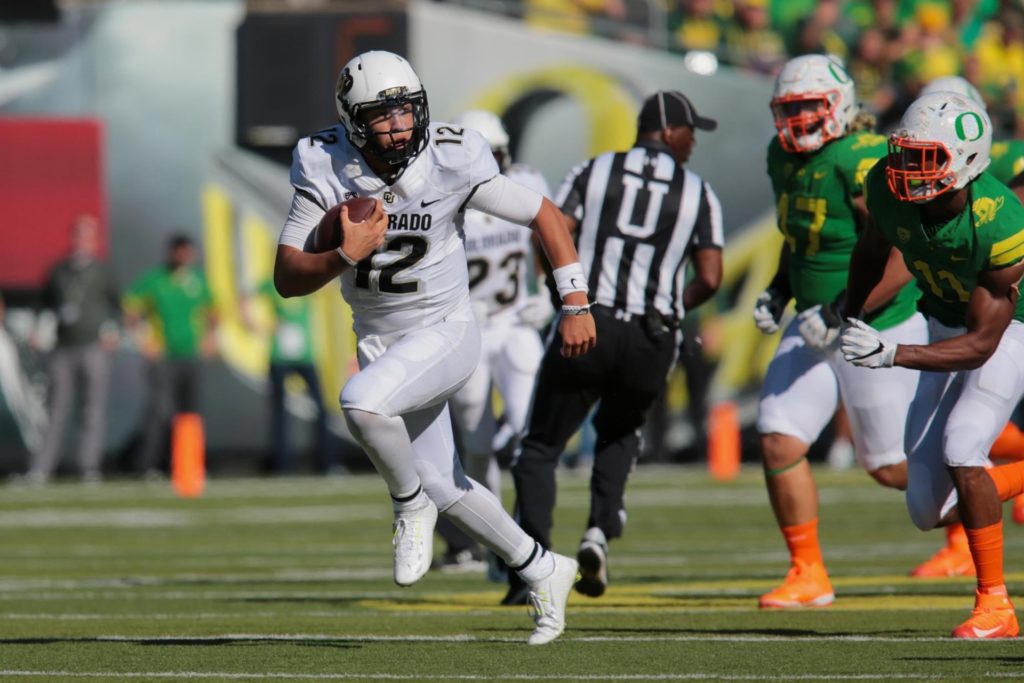 Steven Montez, QB – Buff, buff pass. The elephant in the room is how CU will replace the departed Liufau, who didn’t always put up big numbers and was an injury risk, but was the heart and soul of the team. Montez was decent in his stead, notching nine touchdown passes to five picks, but his completion percentage (59 percent) needs to come up. The one catch on having your backup play a lot? When he becomes the starter (now), the learning curve won’t be as steep.

Afolabi Laguda, S – The Buffs’ leading tackler from 2016 returns to lead the secondary… but he’s all that returns starter-wise from what was a very effective group last year. On the upside, the Buffs seem to have some talent ready to step in, namely Ryan Moeller. But Laguda will be the leader on this unit, and there will be requisite growing pains from losing three standouts back yonder.

Leo Jackson, III, DL – If there’s a worry spot for CU, it’s along the defensive line, which was pivotal in anchoring their top 20 national scoring defense. Jackson returns as the leading tackler… with 6.5 of them in 2016. The Buffs will be starving for someone to step up and lead that group in their 3-4 scheme, and it could depend on whether or not they challenge again for the division crown.

With the lions’ share of the Colorado skill position players returning, this offense actually figures to be better under Montez than it was last year. Still, Lindsay is the straw that stirs the drink when you need things mixed up, and he’ll expand upon his role particularly as a pass catcher and the Buffs will ride a standout offense to division contention. 2,500 yards should get Lindsay some Heisman chatter as well.