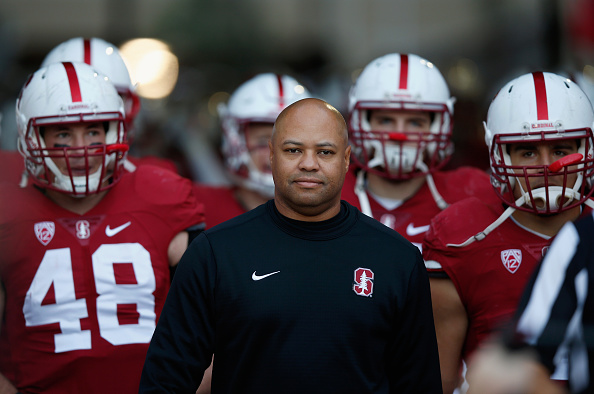 The Comeback’s college football Top 50 countdown is now in the top 10 as we approach the beginning of the regular season. Up next in our preseason rankings, we go to The Farm to take a look at the Stanford Cardinal.

Remember when Stanford was a program that struggled to sit at the big boy table because of the school’s academic restrictions? That’s not an excuse any longer. The culture was set by Jim Harbaugh and it has continued with David Shaw. It’s one of toughness and sound discipline on both sides of the ball.

The Cardinal program knows what it is, recruits to it, and develops guys in the system to be an almost perennial contender in the Pac-12 — and sometimes beyond. And here we are again with high expectations for the 2017 season. Let’s dive in.

Stanford started out the 2016 campaign with some impressive wins, taking down Kansas State, USC, and UCLA in succession to start out 3-0. Then we saw what the Washington Huskies were all about on a Friday night national telecast. The Huskies administered a public flogging to the Cardinal, beating every unit into submission, 44-6.

The loss reset expectations a bit and seemed to be a blow to Stanford’s confidence. David Shaw’s crew went on to lose two of the next three (Washington State and Colorado) to sit at an overall record of 4-3 (2-2 in the Pac-12). And then something clicked.

The tree that loves to dance won its last seven games to finish third in the North Division. Stanford accepted an invite to the Sun Bowl, where it disposed of North Carolina in a close affair to put a nice bow on the season. And that’s where we pick things up heading into 2017.

Stanford goes after kids it knows it can use. Sometimes that results in mediocre classes, according to the recruiting types out there, and other times it’s able to get some of the most talented in a pool of the brightest in the nation. From there, gaps are filled for a fantastic recruiting class. The latter is where things stand this year with the second-rated class in the Pac-12 behind only USC.

It’s not a class that’ll come anywhere near the Alabamas and Ohio States of the world, but the 2017 haul has top-end talent with three five-star recruits, according to the 247 Sports Composite Rankings. There are two twin offensive tackles with Foster Sarell (5th overall) and Walker Little (9th), and then the top pro-style QB in the nation, Davis Mills (15th).

It’s another solid class in a string of them that will keep the program at the level we’ve become accustomed to.

367.1 – The 103rd-ranked total yards on offense per game by Stanford. It was a little surprising for a team that had Christian McCaffrey, but thanks in large part to some tough defenses in the middle of the season, the Cardinal struggled to move the ball at times. That needs to be much, much better if there are designs on crashing some parties this year.

32 minutes –The average time of possession per contest for 2017. You know the deal when you play the Cardinal. They’re going to line up and try to crush your spirits by ramming the ball at you. The style almost always results in a time of possession that’s up there as the best in the nation, but it went a tick down last year. When Stanford is going right, the TOP would ideally be a minute or two more on average.

236 – The amount of first downs for the Stanford offense in 2017. When you look across the landscape of college football, that’s a low number. In fact, it’s tied for 104th with Maryland. While you’d expect fewer first downs with the type of offense that runs the clock, you’d also expect fewer big plays with a muscle-grinding style, meaning more first downs per drive. The numbers can often tell a story, and in this case it means the Cardinal was not able to sustain drives the way it wanted last year.

Why it matters: This is an early indicator of where both programs are. USC comes with a boatload of hype, while Stanford has gotten respect, but is perhaps a bit overlooked. The game last year wasn’t really close, with the Cardinal controlling both lines of scrimmage and slowly taking the life out of the Trojans offense. But that was before Sam Darnold stepped in and became the next best thing since fidget spinners in the Game of Thrones. Lose and there’s still a shot at getting back into the mix for the conference — and maybe more — but the room for error will be razor thin.

Why it matters: The Cardinal was flyin’ high until running into a Washington team that outclassed it in every way. The Huskies are again the favorite to win the North, but to do it, they’ll have to go through the Bay Area and win against a tough-as-nails Stanford team with a lot to prove. Despite what the coaches and players say, you can bet the revenge card will be used in the locker room and in the minds of everyone who was embarrassed in the game last year. The winner will have the serious inside track to the North division.

Bryce Love, RB – Though not as dynamic as Christian McCaffrey, Love held his own last year in a reserve role. He averaged 7.0 yards per carry and seems to fit the Stanford running game perfectly. He can catch the ball out of the backfield and despite his small frame is able to get tough yards between the tackles. He’ll be the guy this year, and it’s his turn to gobble up yards behind a line that should be improved from a rough 2016.

QB, Keller Chryst – Last year, Chryst took over for a struggling Ryan Burns and gave the Cardinal a bit of a spark on offense. However, Chryst went down with a knee injury in the b0wl game, and his return was uncertain until this week when he was named the starter for week one. The doctors have cleared him physically, but anyone that’s had an ACL injury knows the mental part is a different animal. The Cardinal need Chryst to be his polished self, not a guy trying to get things right between his ears. If he is indeed ready to be a play maker out of the gate, look out.

Dalton Schultz, TE – Yeah, we’re staying with all offense, partly because we have that much faith in the defense, and partly because the offense couldn’t punch its way out of a paper bag at times last year. A tight end as a big target in the system Stanford runs can make the difference between being just good and being great. Schultz will be asked to destroy defenders at times in the blocking game, but will also need to be a threat in some of the mismatches that will occur with teams trying to get hat on hat against the “intellectual brutality” of the Cardinal offense.

Stanford will win the North Division. All the talk has centered around Washington, but this Stanford team is waiting in the weeds ready to strike. As long as the quarterback play is up to snuff, Stanford should be able to win a bushel of games and then try to hold serve at home when the Huskies come calling in October. Win that one, even with another slip up along the way, and the Pac-12 North is there for the taking.

The Cardinal will beat USC. Yes the game is in L.A. I get that. But home field hasn’t meant much in this matchup, with Stanford winning seven of the last nine. The reality is that the Cardinal’s style has the ingredients to beat the Trojans. With all of that athleticism and talent, getting into a bar fight is the one thing USC frowns at. Wisconsin does it to more athletically gifted opponents in the Big Ten, and Stanford will do it to USC once again.

Ryan Burns will wrestle the starting QB job back. The coaching staff is hopeful that Keller Chryst is himself when he starts Week 1, but you have to wonder where he really is when game action hits. It’s a lot different going all out and taking hits in a game, than going through reps in a controlled setting. Chryst will start the year as the starter, but he’ll show enough rust mentally to make the coaching staff go back to Burns in a role reversal from last year.