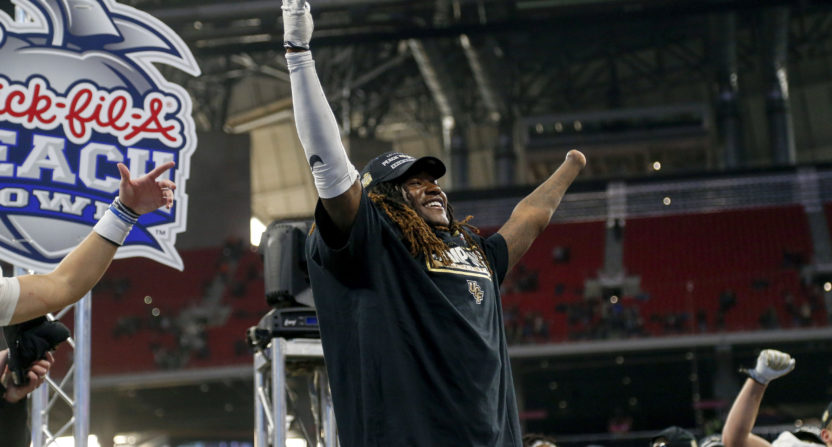 Ever since UCF finished the college football season 13-0 and claimed their very own national championship out of thin air, it’s been causing consternation across the internet.

Sure it’s silly but then again the history of college football is paved with silly national championship claims that many “reputable” schools list in their official records. Considering how arbitrary the logic and polls have been over the years in this sport, is UCF’s title any less realistic than 1902 national titles awarded by entities that no longer exist and no one remembers anyway?

The merits of the claim have opened up all kinds of questions about how college football crowns its champions and how the system remains unfair to G5 schools like UCF. So if it’s “impossible” for schools outside the current power structure to ever win an actual title, why not go ahead and crown yourself?

As we all know in 2018, there is no more official way to denote something than to put it on Wikipedia. While we all know we shouldn’t take what it says as gospel, we pretty much do anyway. However, as SI.com reports, Wikipedia actually does try to be as authentic and factual as possible, which is causing a bit of a tug-of-war in how UCF’s “national title” is noted on their page.

On one hand, the NCAA does not officially award a Division I FBS college football title (the CFP is its own thing), so in theory, UCF isn’t wrong for claiming it with their perfect record. However, you and I both know that Alabama is the actual national champion of this season. They won the right games, they won the playoff, they finished No. 1 in the rankings and polls. They’re the champs.

So try as they might but everytime someone tries to update the 2017 UCF Knights football team Wikipedia page by saying they won the national title, Wikipedia editors get to work removing the annotation and correcting it as they see fit. There is a lot of grey area involved in how it’s all written, and no one seems able to come up with a solution that everyone can agree on, but people keep trying to make the page say what they want and the editors keep trying to put it back how it should be. 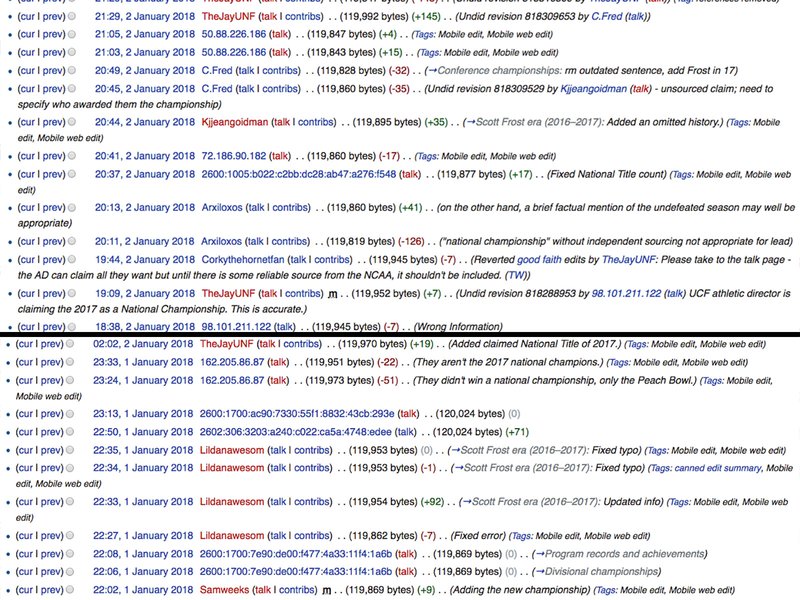 For now, if you go to the UCF Football main page, a compromise seems to have been reached in that UCF now has a “Claimed National Title” for 2017, though that annotation is missing from many sub-pages. There is also a blurb that reads, “As of the 2017 regular season, UCF has 243 victories, has won five division championships and five conference championships, and an undefeated season in 2017. The Knights claim a national championship for the 2017 season despite being excluded from that season’s College Football Playoff.”

We’ll see how long that lasts. The fight for mythical championships and the PR coverage they generate continues…