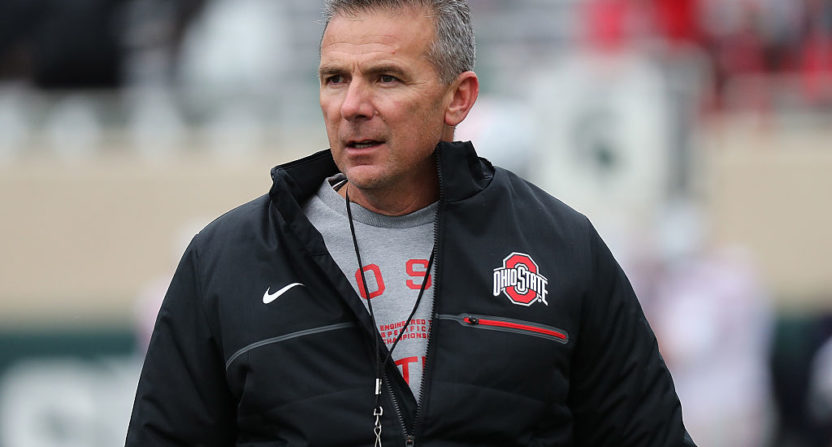 When Urban Meyer arrived at Ohio State in 2012, he inherited a roster that many considered flawed. Then the NCAA brought sanctions on his program. Yet he went 12-0 in his first season. So you can guess what he thinks about people who complain about inheriting a bad situation.

After falling 51-41 at home to Maryland in Week 1, first-year Texas coach Tom Herman, a former Meyer assistant, called out his team’s poor skill level, suggesting that former coach Charlie Strong didn’t leave him much to work with. Meyer told CBS Sports’ Dennis Dodd such comments drive him “insane.” He then dug in even further:

“C’mon man. I don’t know where that came from,” Meyer told CBS Sports. “It’s like a new generation of excuse. [Herman] said, ‘I can’t rub pixie dust on this thing.’ He got a dose of reality. Maryland just scored 51 points on you.

Here’s the original quote from Herman, via USA Today:

“I told our guys to never get used to this feeling, but that if we all thought we were going to come in here and in nine months sprinkle some fairy dust on this team and think that we’ve arrived, then we were wrong,” Herman said.

Herman wasn’t the only coach Meyer called out. He also blasted South Carolina coach Will Muschamp, who was previously Meyer’s successor at Florida. Despite winning 11 games in his second season, Muschamp never found solid footing at Florida. The school fired him after a 28-21 record through four seasons.

Meyer told CBS Sports Muschamp “blamed us for Florida,” though that might have been hyperbole:

It’s not clear if Muschamp ever directly suggested the cupboard was bare when he took over for Meyer. However, at the time of his Florida firing in 2014, Muschamp told CBS Sports, “[We] changed the culture of the program that was labeled by the previous head coach [Meyer] as ‘broken.’ He said it. I didn’t.”

Even if Muschamp’s comments fall in a gray area, Herman’s don’t. And according to Meyer, Herman went directly against Meyer’s teachings by criticizing his predecessor at Texas:

“I’ve advised my coaches when they take new positions [to] always be extremely complimentary. Never talk as if those players aren’t your players,” he explained. “… When I hear coaches say, ‘These aren’t my guys. Wait ’til we get some guys in here,’ I cringe. Whose guys do you think they are?”