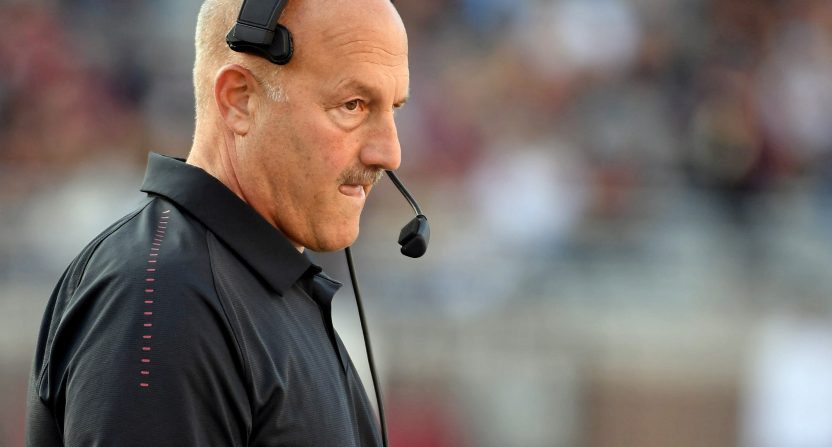 The world of college sports waits for no one and that goes double for college football coaches. Black Sunday, the day after the final Saturday of the regular season, is traditionally when underperforming programs let loose their head coaches in order to start the process of finding their next savior. Sometimes it can be fairly bloody and sometimes you pretty much get what you expect.

For the most part, this year’s FBS coaching purge seems to be more like the latter, though that may change depending on whether or not some initial reports are proven true (we’ll get to that).

Probably the biggest name to lose his job on Sunday was Charlie Strong, fired from South Florida following a 4-8 season. Strong went 21-16 in three years at USF but each year was a diminishing return from the previous one and the writing has been on the wall because of it.

Charlie Strong has been fired at USF, sources told @Stadium. In Strong’s 3 seasons the Bus were 3-14 vs. teams that finished with a winning record.

It was just six years ago that Strong was considered one of the top coaches in the nation, parlaying success at Louisville into the coveted Texas head coaching gig. He never earned a winning record in Austin and was fired before coming to USF in what was supposed to be something of a reputation rehab job. That didn’t go according to plan and it will be interesting to see where Strong goes from here.

The biggest name amongst P5 programs to get the ax (at least right now) was Boston College’s Steve Addazio. Addazio spent seven seasons in Chestnut Hill and compiled a 44-44 record. His tenure will be remembered for the number of times BC ended the season with seven wins under his watch (five, with the chance to make it six if they win their bowl game). While some might make the case that BC should be okay with perpetual seven-win seasons and bowl appearances, a large section of the fanbase got fed up with waiting for the program to take the next step.

Of course, we’ll always have Guys Being Dudes.

The only other FBS head coach officially fired so far today was Frank Wilson, out after going 19-27 in four seasons with UTSA.

Frank Wilson has been fired after four seasons at UTSA, source told @Stadium

One person we know won’t be considered to replace Wilson is Art Briles. While he looms over college football like a phantom waiting for someone to open the door, Briles certainly won’t get an interview here.

UTSA AD Lisa Campos said Art Briles will not be a candidate in her search: "I think it’s easy to cross off Art Briles, given our relationship with @brendatracy24 and given the stance we’ve taken on sexual assault and sexual abuse awareness. That is a pretty obvious one for me."

UPDATE: You can add Matt Luke to the pile. Luke was fired by Ole Miss after three seasons of diminishing returns as well. Luke’s Rebels went 4-8 this season and literally pissed away their rivalry game against Mississippi State. Had they won that game, perhaps he’d still be there. But maybe not.

Matt Luke has been fired at Ole Miss, per sources. More on @RebelGrove later.

Today’s firings bring the total number of open FBS jobs to nine. They include Arkansas, Florida State, Missouri, New Mexico, and UNLV. Some of those jobs opened up during the week as some schools didn’t feel like waiting.

There is still one more potential head coach opening and it’s a doozy. Early on Sunday, a report broke from Sports Illustrated’s USC “Maven” that Clay Helton was out after four seasons. However, SI’s Pat Forde later reported that the initial reports were unconfirmed and Helton had not been fired. Also, he might keep his job after all. So we had the curious situation of Sports Illustrated shooting down its own report.

It remains to be seen if Helton will keep his job but, if not, expect that to be the biggest domino in the offseason. Most of the other available P5 jobs will depend on how that shakes out. But if Helton remains, expect Florida State, Missouri, Ole Miss, and Arkansas to be the most highly coveted spots.