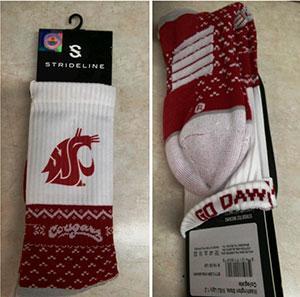 A few unlucky Washington State Cougars fans likely received an unpleasant surprise this holiday season when they went to try on their brand new “Cougars” socks.

Fans thought they were getting a nice pair of $18 Wazzou-themed ugly Christmas sweater socks, but the stockings were unintentionally ugly for a different reason. On the inside lip of the socks were the words “Go Dawgs” in bright red, bold letters, which just so happens to be the cheer of the school’s biggest rival, the University of Washington Huskies.

Huskies vs. Cougs in Pac-12 opener coming up. Hope WSU fans are repping w/ their socks on. Props to @strideline on the "mistake." #GoDawgs pic.twitter.com/rFKJKiRlsd

Strideline is based out of Seattle, and the company said the error was simply the result of the design team failing to switch the slogan along with the outside sock template. Chalk this one up to human error, but UW also calls Seattle home, and who knows if a mischievous Husky alum didn’t play a role in trolling the rival fanbase.

The company’s two founders admitted that some conspiracy theorists might find some ground to stand on — they are both Washington alums — but founder Jake Director also reiterated that the mistake was an honest one.

“We’ve got a bunch of Cougs on our team,” [Director] said. “It’s not just a company of a bunch of Husky fans!”

No matter the intent, Cougars fans won’t be left wearing traitorous socks. The drugstore that sold these socks exclusively, Bartell Drugs, issued a recall for the approximately 245 pairs of erroneous socks sold. No matter the condition, customers will be able to return their socks for a refund.