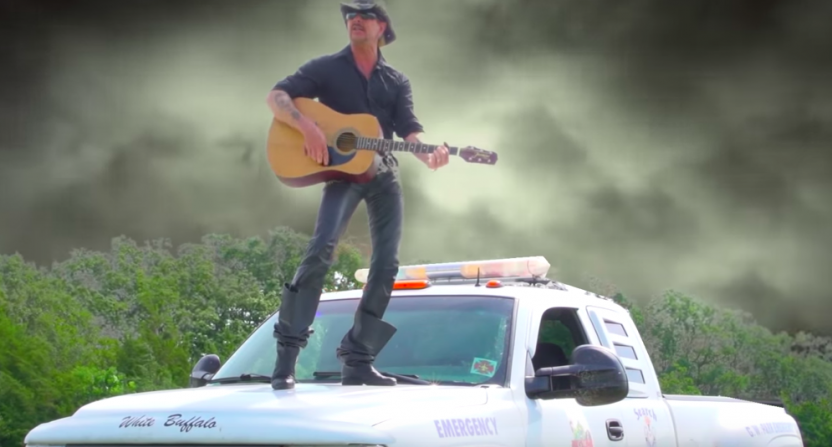 You’ve watched Tiger King already, right? If not, we’re really not sure what you’re waiting for. It’s everything you could ever want out of a Netflix documentary series during a time period in which you are forced to remain home.

The cast of characters is unbelievable. The plot threads are insane. The fashion choices are incomprehensible. And the only letdown is that the big cats featured throughout Tiger King weren’t given the chance to eat every single one of the humans involved (though the jury is out on Don Lewis…).

For all of the madness, lunatics, and insane hair featured in the docuseries, no one can match Joseph Allen Maldonado-Passage, a.k.a. Joe Exotic. The Tiger King himself looms large over everything and everything he does looms large. From his Presidential campaign to his off-the-wall internet TV show to his ever-budding music career, Exotic did everything with an air of unearned panache that could not be missed, much as you might try.

A few pieces of trivia, for people who just watched #TigerKing on Netflix.

1. Joe did not write or sing those country songs. It was an outfit called the Clinton Johnson Band. Joe just sang softly over the top of the vocal track: https://t.co/s4ak4itmUM

Speaking of that music career, Exotic did release multiple albums, though it should be noted that the albums were actually created by a band who then licensed them out to him, per the Los Angeles Times. But if you’ve seen the docuseries, you know that would never stop Exotic from claiming he made them himself as well as producing plenty of music videos to highlight “his” talent. You saw clips from a few videos in the series, but it’s time to take a closer look at all his music videos to determine the definitive rankings they deserve.

12. Do You Ever Wonder What Love Can Do?

One of the most egregious things about Joe Exotic (and there are many) was the way he intertwined the need for humans to have personal freedom with his desire to put large animals in cages. It’s gross, crass, tone-deaf, and on full display in this video, which is basically a compilation of moments with his animals meant to evoke something sweet but instead just amplifies the grossness of his whole operation.

So many of Joe’s music videos basically make him look like a bass fisherman taking a break to let his emotions out, interspersed with footage of tigers.

Dedicated to Joe’s first husband, John Finlay, this one is something of a prototype for most of Exotic’s songs and music videos. The generic lyrics are based around a wistful desire for what once was and cannot be. As for the video, it’s mostly Joe singing from his truck. There are a few of his patented way-too-literal-to-match-the-lyrics inserts peppered throughout. The big mistake most of these videos make is the idea that watching Joe sing in a single spot is interesting enough to take up most of the runtime. That motif is in full effect here.

The shots of Joe in the music studio are especially hilarious knowing that he’s not even the person singing the song. It also introduces another classic Joe Exotic motif. It’s supposed to be about someone else but become all about Joe instead. The insanely fast quick-cuts throughout the video are jarring and seem to call for some kind of seizure warning. However, special credit to Joe for turning this into an infomercial for the animal park right at the end.

Joe doesn’t show up for the first ten seconds of this video and it’s slightly jarring to think he might not appear…but then he does (out of thin air) and everything is right again. Not one for deep metaphors, a bible shows up right after Joe mentions the bible. And while it appears this is some kind of homage to his dad, most of the focus is on Joe “singing” with his eyes closed. (This one’s especially cringey when you know that Joe eventually ruins his mother’s finances).

The first thing you notice is that the video is almost nine minutes long! That is way too many minutes for a music video. But a music video featuring a bland song that overstays its welcome is a Joe Exotic specialty. While most of the video is Joe signing from the clouds, it’s intercut with random clips from the life and interests of the titular Alisa. Like so many things in Joe’s life, it appears to be a rather heartfelt tribute to someone who has passed away that is turned into a showcase for himself.

6. I Can’t Believe This Feeling

Joe can’t make a music video that isn’t mostly shots of him singing in a direction other than the camera. There are even multiple shots of Joe signing with his back to the camera, which is certainly a choice. Joe also loves signing from the driver’s seat of his truck with the door ajar. It’s where he’s his most comfortable, apparently.

Joe’s fight anthem taps into a classic trope of his. The “I don’t care what you think of me so let me tell you how much I don’t care.” Most of the video fits the usual Joe Exotic video setup. Lots of long shots of him in and around the park “singing.” Joe in a recording booth. Random clips of animals. The multiple clips of guests waving at the camera are a bit confusing but the segment of Joe giving blood(?) stands out for its particular WTF-ness.

This one’s a bit confusing from the jump considering Joe is and out & proud gay man, but the minute you start trying to make sense of Joe Exotic you miss the point. That said, this video is a real gem, featuring a green-screened shot of Joe standing on top of a mini-mall while women hoot and holler, Joe trying to look cool on a motorcycle, Joe trying to look cool while getting a tattoo, and Joe trying to look cool in a limousine sitting next to his husband while hiding from ogling women. You’d almost think he was making some kind of meta-commentary on sexuality somewhere in here until you remember this is Joe Exotic we’re talking about. We just hope those two young ladies all over Joe got paid well to do this.*

*we are pretty sure they did not

3. Because You Love Me

Imagine going to a roadside animal park and the eccentric owner tells you he’s filming a music video for his new song and wants you to be in the background. Oh and he might touch your back or randomly grab you while singing. And he might shake your hand at some point too. And he’s going to sing to tigers through a cage for an extremely long time. And his employees are just going to hang out nearby, often in the shot. That’s a day to tell the grandkids about.

First of all, credit where credit is due on that Carole Baskin lookalike. It is uncanny how similar she is, to the point where you have to keep reminding yourself that she did not, in fact, choose to appear in a music video about she kill allegedly killed her millionaire husband and fed him to their tigers. Things fall apart when it lingers on “Carole” feeding the tiger for what feels like hours, but there was clearly a lot more thought put into the throughline here than most of Joe’s videos (which isn’t saying much). Also, why is Joe wearing a priest collar? You know what, let’s not get into it…

Joe’s opus, in song and music video form. The lyrics are tone deaf from the start. It’a call to let tigers roam free by a man fighting to make sure he can put them in small cages. The on-the-nose imagery of a clock (“time is a tickin'”) and Joe using a camera (“You better take a picture”). The Holocaust is referenced at one point. And let’s not forget the amazing shot of Joe’s husband laying down his rifle while hunting tigers in the “jungle.” Everything is perfectly terrible in only a way that Joe Exotic can make it.