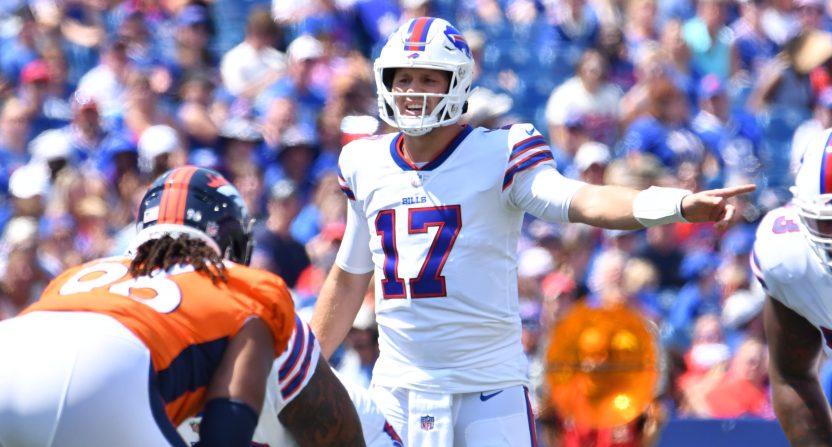 So, you’ve decided to watch the National Football League. Congratulations! After a crazy offseason, it could even be a crazier season.

Tom Brady retired, unretired, and then took a mysterious leave of absence that has prompted speculation that there may be trouble at home. Bruce Arians retired, but he’s still hanging around the Tampa Bay Buccaneers facility like a barfly who can’t find the exit. The Cleveland Browns, once lovable losers, made a Faustian bargain. Brian Flores, who’s suing the NFL for racial discrimination, is now an assistant for the most powerful Black coach in the league. Miami Dolphins owner Stephen Ross was accused of offering bribes for tanking and was punished for tampering. NFL MVP and Antivaxxer MVP Aaron Rodgers is still stepping on rakes. Antonio Brown’s continued descent into madness probably has ended his career. And Calvin Ridley’s gambling habits may have ended his.

no one knows what it means but it’s provocative pic.twitter.com/4nqbUOpQWd

Super Bowl or bust for the Buffalo Bills

The Buffalo Bills haven’t entered a season with these kinds of expectations since the glory days of the 1990s. The team that annihilated the New England Patriots in the playoffs and should have beaten the Kansas City Chiefs is the betting favorite. Pro Football Focus rates the Bills’ roster as the best in the league. The biggest off-season addition was adding Von Miller, who had a career resurgence with the Los Angeles Rams. He could be the missing piece for a defense that gave up the fewest total yards (289.2) and points (18.3) per game last season.

Ultimately, the Bills need Josh Allen to be the guy he was in the postseason (9 TDs, 0 INTs in two games). And not the guy he was against Indianapolis, Jacksonville, and Atlanta. What could help him is the emergence of Gabriel Davis and the drafting of James Cook. The biggest concerns for the Bills: a new offensive coordinator in Ken Dorsey and a suspect offensive line.

Going through the AFC in the postseason will be a grind. Three teams in the AFC West alone could be contenders: the Los Angeles Chargers, Kansas City, and Denver.

Who could be this year’s version of the Cincinnati Bengals?

The Bengals (10-7) shocked everyone by making it to the Super Bowl. NFL analytics expert Warren Sharp thinks it could be the Minnesota Vikings this time around.

We tend to agree. There’s a reason why Jim Harbaugh wanted this job. The Vikings‘ skill position players, led by Justin Jefferson, Dalvin Cook, Adam Thielen, and Jalen Reagor, are the best in the NFC North. New head coach Kevin O’Connell should be able to get the most out of this group. Quarterback Kirk Cousins has limitations, but he doesn’t have to be great for Minnesota to win the division.

As for getting to the Super Bowl, the defending champion Rams, Tampa Bay, and the Green Bay Packers are safer bets. But the teams in the NFC aren’t as strong as the AFC. The Vikings have a puncher’s chance.

Khalil Mack, DE, Los Angeles Chargers – Once the most feared pass-rusher in the league, injuries and age have caught up with the 31-year-old. He hasn’t had double-digit sacks since 2018. Playing the opposite side of Joey Bosa should help.

Michael Thomas, WR, New Orleans Saints – Three years ago, he led the NFL in catches (140) and yards (1,725). After missing the entire 2021 season with an ankle injury, can he resume his dominance? It will be harder with a different quarterback (Jameis Winston) and a different coach (Allen).

Daniel Jones, QB, New York Giants – The Giants didn’t pick up Jones’s fifth-year option. That’s all you need to know. Chances are the Giants’ quarterback of 2023 isn’t on the current roster. However, Jones still needs to perform decently so that he can land a job for next year.

Baker Mayfield, QB, Carolina Panthers – Mayfield’s multitude of injuries contributed to his struggles last season. There were games when he probably shouldn’t have been on the field. When healthy, he can be an average starting quarterback.

Frank Clark, DE, Kansas City Chiefs – Kansas City is one of the league’s better-run organizations. But Clark has been mostly a disappointment (4.5 sacks last year) since being acquired in a trade with Seattle in 2019. He showed up to camp in better shape after reportedly giving up alcohol.

🙏 Prayers up for Poe the Mascot, the Ravens mascot.

🥺 this sucks to see a mascot go on 'injured reserve' like this. pic.twitter.com/5HhLsbflj2

A Super Bowl the Bosa family can root for: San Francisco 49ers vs. Los Angeles Chargers

An encouraging injury update on Carolina Panthers star running back Christian McCaffrey ahead of Sunday's game against the Arizona Cardinals.

Kent State beat Ohio in overtime in the MAC opener, thanks to a historic performance from running back Marquez Cooper and receiver Dante Cephas

An encouraging injury update on Carolina Panthers star running back Christian McCaffrey ahead of Sunday's game against the Arizona Cardinals.

Kent State beat Ohio in overtime in the MAC opener, thanks to a historic performance from running back Marquez Cooper and receiver Dante Cephas