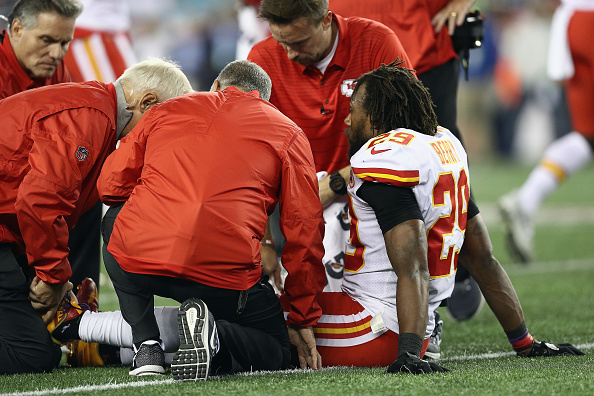 Week 1 was a dud in a lot of respects. Lots of one-sided games, plenty of penalties and a high degree of football sloppiness plagued the opening weekend of the NFL season. But the worst part about Week 1 was probably the fact so many key players suffered major injuries.

Here are five that could be absolute game-changers.

Kansas City Chiefs safety Eric Berry: Thursday’s impressive victory over the mighty New England Patriots might soon be viewed in hindsight as something that was bittersweet for the Chiefs, simply because they lost one of the league’s best defensive backs in the process. Berry, who was an All-Pro in each of his last three healthy seasons, ruptured his left Achilles tendon in the opener and is thus out for the year. Despite the convincing victory, I actually feel worse about the Chiefs now than I did a week ago. That’s all Berry-related.

Arizona Cardinals running back David Johnson: My apologies to Cardinals fans, the Johnson family and, of course, everybody who used a first-round fantasy pick on the 25-year-old reigning scrimmage yards king. Johnson, who put up 2,118 yards from scrimmage and 20 total touchdowns in 2016, suffered a severe wrist injury which required surgery and will keep him out most of the year. He was Arizona’s only potential savior — they just can’t compete without him.

Jacksonville Jaguars wide receiver Allen Robinson: The Jaguars crushed the division-rival Houston Texans on Sunday, and a key to that victory was the fact they didn’t put too much on untrustworthy young quarterback Blake Bortles. But the victory was dampened by the fact they learned they’d have one less stud to support Bortles going forward. Robinson, who led the offense in catches, receiving yardage and touchdown receptions last season, is out for the year with a torn ACL. That puts a scary amount of pressure on Bortles, as well as young talents Marqise Lee and Allen Hurns.

#49ers rookie LB Reuben Foster had a high-ankle sprain, based on the preliminary diagnosis, per sources. More tests coming. Will miss time

San Francisco 49ers linebacker Reuben Foster: Maybe Foster wasn’t going to carry San Francisco back to the playoffs in his first season, but the first-round pick was a top-three candidate for defensive player of the year (alongside Myles Garrett and Jamal Adams). But without him, they’ll be without a major attraction as well as a key contributor. Foster was an off-the-charts front-seven defender at Alabama, but now NFL Network’s Ian Rapoport believes he’s got one of those dreaded high-ankle sprains.

Chicago Bears linebacker Jerrell Freeman and wide receiver Kevin White: This is a 2-for-1. The Bears weren’t going to the playoffs anyway, but losing Freeman (one of their best defenders) and White (a dude with a lot of talent, and their top receiver by default after losing Cameron Meredith) really hurts. The Bears were bad to begin with, but now they’re entering New York Jets territory.