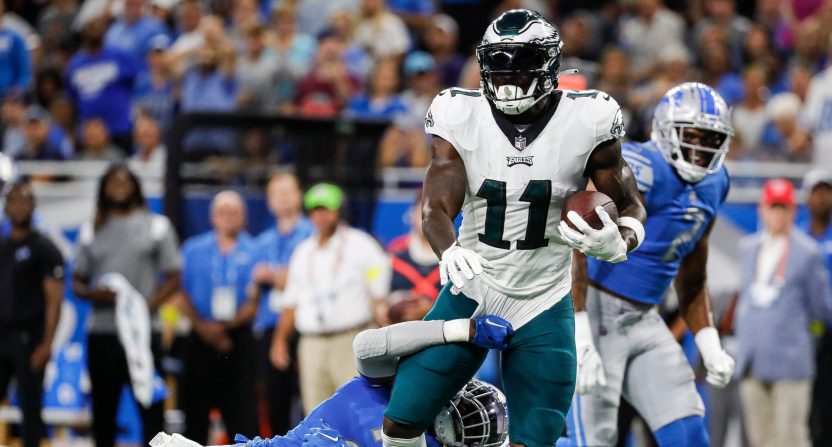 A change of scenery can do wonders for a person’s mental health and performance in their chosen profeession. That belief seems to be ringing true for A.J. Brown.

In his first game with the Philadelphia Eagles, Brown looked every bit the part of a superstar wideout —  recording 10 catches for 155 yards, with 128 of those yards coming in the first half alone.

Even though it’s only one game, Brown drew comparisons to one of the best receivers in Eagles (and NFL) history, Terrell Owens.

AJ Brown is easily the best Eagles receiver since Terrell Owens. That is not a take, it’s a fact.

AJ Brown was absolutely outstanding for the #Eagles today. He reminds me of Terrell Owens.

He’s a dude who can physically dominate anyone who is covering him, and eat when he has the ball in his hands.

Although it’s way to early to predict how he’ll perform in the coming weeks, Brown looks to be getting his career back on track after injuries destroyed his final season with the Tennessee Titans.

While we’ll wait and see what the future holds for Brown in the City of Brotherly Love, his connection with Jalen Hurts could potentially become one of the best quarterback-receiver duos in the league.

Absolute DIME by Jalen Hurts and WHAT A CATCH by AJ Brown!!! 🔥#Eaglespic.twitter.com/lRMMUnQJUK

Brown does hold one thing over Owens’ head. His 155 receiving yards against the Lions put him ahead Donte’ Stallworth, who previously held the record for most receiving yards for a player making his Philadelphia debut. Stallworth caught six passes for 141 yards for his debut in 2006. In first game with the Eagles in 2004, Owens had eight receptions for 68 yards — but did have three touchdowns.

The birds will host their first home game in Week 2 against the Minnesota Vikings on Monday Night Football.