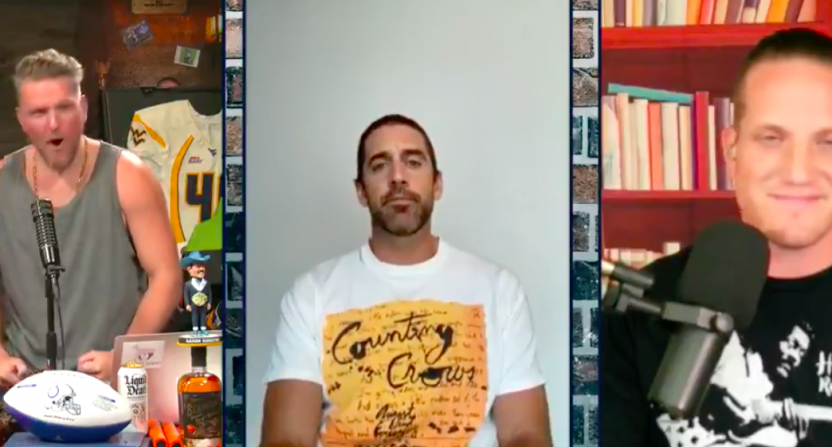 After throwing four touchdowns in a win over the Lions, Green Bay Packers quarterback Aaron Rodgers responded to his many critics in the post-game presser on Monday.

“We tried to show that we cared a little bit more tonight,” said Rodgers. “I just think people like to say a lot of bull****, and it’s nice to come back in here after a game like that.”

“I think there’s even more now than when I first started playing, so many overreactions that happen on a week-to-week basis. So, it’s nice to come out and have a good performance and get the trolls off our back for at least a week.”

Not content to let that speak for itself, Rodgers furthered his feedback on “trolls” on Tuesday during his weekly appearance on The Pat McAfee Show, laying out his feelings on the media landscape, hot-take culture, and why people who aren’t in his life feel the need to talk about his mental state.

“It’s absolute horse*** to give a platform to people who have no idea what they’re talking about as far as my mental state and my focus, my work habits,” said Rodgers. “People that have not been around me, are not in my life, I don’t have communication with them, they’re not in the locker room. That’s chicken***. It’s so ridiculous that people get a platform to do this and it’s the same type of people.”

“On the flip side of that, I think, in this day and age of media…it’s all about clicks and hits and views…the opinions that are garnering the most attention are the most outlandish. So it’s not even Overreaction Monday or Tuesday anymore, it’s Overreaction Every Time A Microphone Is In Your Face. Every time you’re on a panel, it’s ‘who can say the most outlandish things,’ because that’s gonna give you the most hits.”

“I’m always gonna give a reminder to listen to the source of some of these things. Be reminded they’re talking to the same people giving the same tired rhetoric. I was just surprised after week one there was such a story out there. But what’s crazy to me is to let one storyline by a person who has no contact with me, has zero relationships, for that to become some kind of narrative that’s out there. That now I somehow don’t care about ball because of my zen attitude in the offseason. That’s the bull*** I was talking about last night.”

“The trolls are out there, I get it. But the truth and fact should not be replaced by ill-founded conjecture, and when it is, then I’m thankful for this opportunity…to be able to say, hey look, think about who’s saying these things.”

Rodgers didn’t mention former Packers tight end Jermichael Finley by name but it’s pretty hard to deny that he was referring to his ex-teammate who spent the week talking about the QB’s work ethic. Not to mention the anonymous NFL executives and NFL pregame hosts who all had opinions on Rodgers’ state of mind.

Rodgers expanded on those thoughts, specifically on his relationship with the media.

"I think all these people on all these shows think they're celebrities & they believe they have this platform to say whatever they want.. that's the state of the media right now"~@AaronRodgers12#PatMcAfeeShowLIVE pic.twitter.com/80SpbjbV4a

Rodgers goes on to say it wasn’t like this in 2005, which is kinda true but also a bit of an oversimplification. We were certainly well on our way to the kind of media culture we have today back then. The sports media landscape was already a “debate me” mindset geared towards strong opinions. But it’s a fair critique to consider.

Regardless, these are some very strong comments and rebuttals from Rodgers. And while the punches may have indeed landed, he also predicted what the reaction is going to be. We can expect to see all the talking heads that Rodgers is complaining about back at it this week to respond to his feedback. And we’re sure the cycle will continue.