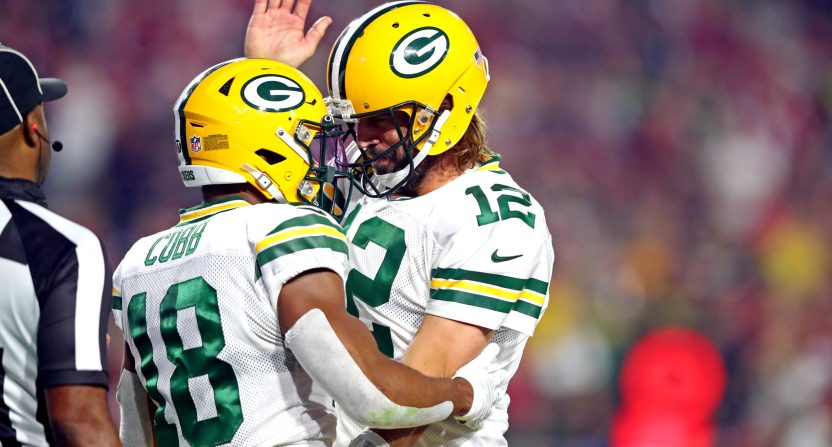 The Green Bay Packers underwent some major changes this offseason that could greatly impact their upcoming season.

After contract negotiations between the Packers and wide receiver Davante Adams were put on the back burner in favor of Aaron Rodgers’ contract, Adams was traded to the Las Vegas Raiders to reunite with former Fresno State teammate Derek Carr.

The Packers also lost veteran wide receiver Marquez Valdes-Scantling in free agency, who, combined with Adams, made up a huge part of their offensive production last season.

That leaves Green Bay in a precarious position for the upcoming 2022 NFL season. Rodgers will have a bunch of new faces to work with at the wide receiver position, and he gave his honest thoughts on the group in an interview with The Athletic last week.

“I like production over potential,” said Rodgers. “We have some production. We have a lot of potential. So we need to temper expectations and heighten the accountability. I think that’s the most important thing for those guys. There are guys who’ve done some things in the league and there are guys that haven’t and they’re going to get opportunities, so reasonable expectations for those guys and then high expectations and accountability for the entire room.”

In terms of production alone, the Packers wide receiving core is far from impressive.

Allen Lazard and Randall Cobb are the only receivers still on the Packers roster who had over 100 receiving yards last year. That obviously has a lot to do with a lack of snaps played for the rest of the Packers wide receivers when Adams and Valdes-Scantling were still in the mix, but the majority of the Packers receivers are nonetheless very unproven.

The Packers did prioritize wide receivers in the 2022 NFL draft, taking three receivers among their 11 picks. But they will need to prove their worth quickly if Rodgers and the Packers want to make it back to the playoffs next year.

Rodgers is as good of a quarterback as anyone in the league, and he can certainly raise the value of a wide receiver due to his impressive play. That being said, it will be interesting to see how the team fares without having Davante Adams as their top option next year.