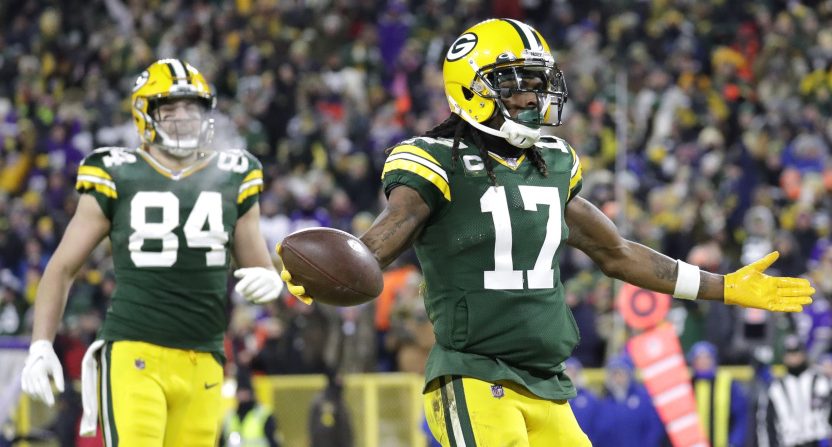 Before he signed an extension with the Green Bay Packers, Aaron Rodgers made it very clear how important it was that the team figure something out with star wide receiver Davante Adams. That appeared to be the case when Rodgers cleared cap space and the Packers reportedly franchise-tagged Adams while they worked out a long-term deal. Apparently, negotiations didn’t go as hoped because the Packers traded their playmaker to the Las Vegas Raiders on Thursday for two 2022 draft picks, per Adam Schefter.

That is a shocker. Especially because one would imagine that Rodgers was counting on Adams being there in green and gold when he signed his extension in a way meant to be cap-friendly while also getting huge money himself.

Per Ian Rapoport, the Raiders will give Adams what he wanted, a contract that makes him the highest-paid wide receiver in the NFL. They’ll be sending the Packers at least one first-round pick, “potentially more picks,” and a player (UPDATE: It’s this year’s Raiders’ first- and second-round picks).

Sources: The #Raiders are in the final stages of trading for #Packers star WR Davante Adams, who receives a new contract that makes him the highest paid WR in the NFL. A blockbuster.

Las Vegas sends back a 1st round pick, potentially more picks and a player.

Source: The #Packers are receiving a 1st and a 2nd rounder in this year’s draft in exchange for WR Davante Adams

The Raiders get an absolute superstar in Adams, who has been to five-straight Pro Bowls and has been named First-team All-Pro for two consecutive seasons. In his eighth season in the NFL, he racked up 123 receptions, 1,553 receiving yards, and 11 touchdowns.

As you can imagine, the move sent shockwaves through the NFL world on social media as the Packers took some heat, Aaron Rodgers’ contract came into question. and everyone wondered if it’s possible for the AFC West to get any wilder.

Aaron Rodgers signed that huge deal under the premise that Davante Adams was coming back. Yes, I bet he's shocked and livid https://t.co/fePcILshDg

Can Aaron Rodgers’ new contract still be considered “team-friendly” if it cost the Packers Davante Adams?

The last time Derek Carr and Davante Adams were teammates (at Fresno State):

Aaron Rodgers doesn't even know Davante Adams has been dealt yet, he's doing some panchakarma.

Smart money is on the drama between Rodgers and the Packers to pick up again now that his favorite play-maker is gone. Meanwhile, the Raiders have officially kept pace with the rest of the AFC West arms race and no one is happier right now than Derek Carr.