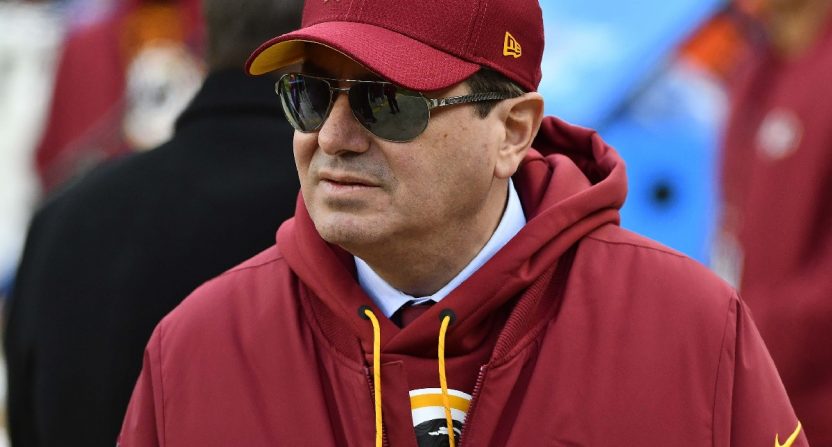 Dan Snyder has steadfastly refused to change his team’s name, but for the first time in recent memory there are voices pushing for it that he might not be able to ignore.

The biggest: FedEx, which announced they have officially requested that Washington change the team’s nickname.

“We have communicated to the team in Washington our request that they change the team name,” FedEx said in a statement obtained by ESPN.

FedEx paid $205 million to the Redskins for naming rights to the stadium in 1998 in a deal that runs through 2025. Frederick Smith, the chairman, CEO and president of FedEx Corp., also owns a minority stake in the Redskins.

This is on the heels of Mary Emily O’Hara’s AdWeek report on institutional investors asking FedEx, Nike, and PepsiCo to sever ties with the team.

On Friday, three separate letters signed by 87 investment firms and shareholders worth a collective $620 billion asked Nike, FedEx and PepsiCo to terminate their business relationships with the NFL’s Washington Redskins unless the team agrees to change its controversial name.
…

After the reckoning brought by June’s global protests against racism and police killings of Black Americans, Native American leaders—and advocates who want to see the NFL team change its name—are acting with renewed urgency, hoping to strike while the iron is hot. The investor letter to PepsiCo, for example, cites the company’s “decision to sunset the Aunt Jemima brand is an important and meaningful step,” and calls on it to continue that commitment to divesting from racist mascots by ending its relationship with the Redskins.
The investor letters to the three major brands are led by First Peoples Worldwide, Oneida Nation Trust Enrollment Committee, Trillium Asset Management, LLC Boston Common Asset Management, LLC Boston Trust Walden Mercy Investment Services and First Affirmative Financial Network. Another roughly 80 firms and trusts, many of which are social impact strategy investment firms or faith-based portfolios, signed on as well.

Meanwhile, the name is also an issue if the team wants to explore a return to Washington D.C., too.
From ESPN:

The Washington Post reported that Eleanor Holmes Norton, the District of Columbia’s nonvoting delegate to the House of Representatives, made it clear the nickname needed to be changed if the team wanted to return to the district.

That stance serves as a potential roadblock if the franchise wants to move back to the district when its lease on the land at FedEx Field in Landover, Maryland, is up after the 2027 season. Washington is looking at sites in the district, Maryland and Virginia.

It is incredible the amount of common sense voices billionaires can ignore, and Snyder has been demonstrating that for decades now. But one thing they can never ignore: potentially devastating financial hits. That’s why FedEx is finally speaking out, too, of course. They didn’t just suddenly wake up and realize that having an ownership stake and a stadium sponsorship for a team with a racist nickname was morally bereft.