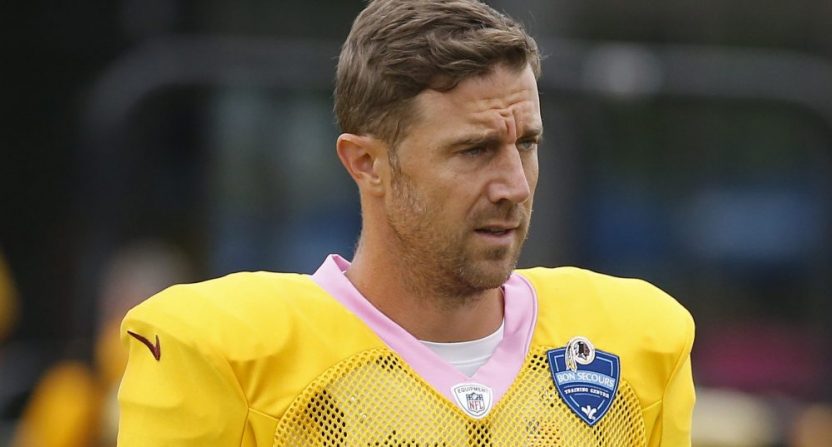 Smith returned to play during the 2020 season, coming back from a horrific broken leg injury that nearly resulted in his lower right leg being amputated. Playing football again appeared to be an afterthought, yet Smith incredibly recovered and rehabilitated to the point where he was cleared for full contact action.

Though Smith was on the Washington roster, whether or not he would actually play in a game seemed in doubt until quarterbacks Dwayne Haskins and Kyle Allen were out for a Week 5 game against the Los Angeles Rams. Smith came in after Allen was injured, completing nine of 17 passes for 37 yards in a 30-10 loss.

QB Alex Smith holds $10.8M of dead cap with Washington. His release will free up $13.6M of cap space, leaving Taylor Heinicke ($2M) as the only QB under contract for WFT.https://t.co/nXYYihyf7I

Smith went on to play in seven more games for Washington, leading the team to wins in five of those contests and an improbable playoff bid. Altogether, he completed 67 percent of his passes (168-of-252) for 1,582 yards and six touchdowns with eight interceptions.

However, Smith missed Washington’s wild-card playoff game against the eventual Super Bowl champion Tampa Bay Buccaneers, providing an opportunity for backup Taylor Heinicke to shine (throwing for 306 yards, rushing for 46, and producing two touchdowns) and possibly position himself as the team’s quarterback for next season.

Yet in a recent interview with GQ, Smith revealed that his comeback effort may have encouraged but he wasn’t really welcomed back to the team. At least until him returning actually seemed viable, and events dictated that he needed to play.

So perhaps it shouldn’t be a surprise that coach Ron Rivera and new general manager Martin Mayhew prefer to move on.

By cutting Smith, Washington will save approximately $14 million on what would’ve been his 2021 salary. However, signing bonus money that’s already been paid will result in nearly $11 million of “dead cap” money that the team is still on the hook for this season.

The original four-year, $94 million contract that Smith signed in 2018 would have run through 2022, with the quarterback set to be paid around $16 million. Washington inked Smith to that deal after acquiring him from the Kansas City Chiefs. The Chiefs received a 2018 third-round draft pick and cornerback Kendall Fuller in exchange.

Will another NFL team be willing to take a chance on Smith? He has history with Chicago Bears coach Matt Nagy going back to their days in Kansas City when Nagy was the Chiefs’ offensive coordinator. And the Bears need a quarterback. But can Smith be relied upon as a 16-game starter anymore?

Other teams that could show interest include the Patriots, Broncos, Texans, Jaguars, Steelers, and Panthers. The same questions would apply. But some coaches might like Smith around as a veteran backup.

Regardless of what happens with Smith from here on out, he defied every expectation by coming back to play in the NFL last season. Most anyone else who had made as much money as he had, experienced as much success, and had a family to consider surely would’ve walked away. Instead, Smith became an inspirational story that will be told for years to come.