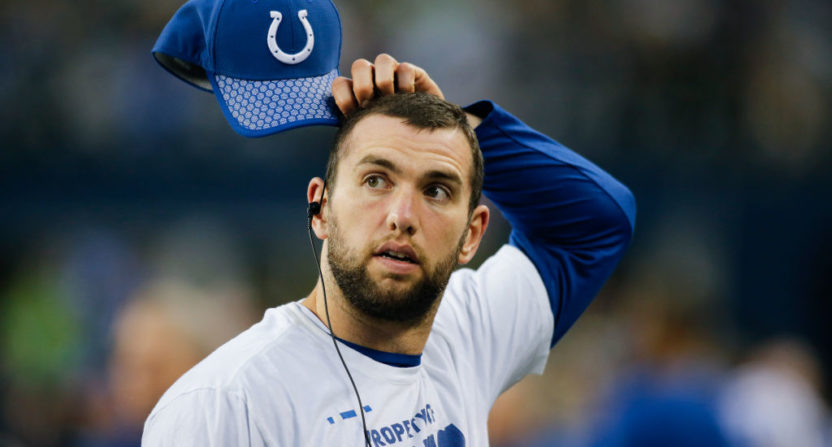 Andrew Luck’s season was over before it even began, as lingering problems with his throwing arm forced Luck onto injured reserve in November.

Luck’s injury first surfaced back in 2015, and the Colts essentially bungled their way through a series of treatment options and quick returns to the field, to the point Luck essentially fled to Europe in early November. That’s after Tony Dungy’s hot mic revealed Jim Irsay’s line of thinking on Luck’s injury: that the franchise quarterback is imagining the problem.

This is a baffling array of poor decision-making from the Colts, demonstrating exactly how not to handle a player who was clearly in the upper tier of NFL quarterbacks; that’s one of the most valuable assets in sports. If you want to get cold and calculating, it’s also not the best way to maximize your investment in Luck; the Colts, after all, just made Luck one of the highest paid players ever in June of 2016.

Now, as Luck prepares to return from his European experimental treatment sojourn, there’s this report from ESPN’s Chris Mortenson, which has Luck and the Colts already preparing for the possibility of surgery:

Luck is optimistic he can avoid another surgery based on the results of his extended European treatment and rehab, sources said. He is scheduled to return from his trip in the next week.

The next stage is for Luck to engage in a throwing regimen that previously resulted in a setback with pain and discomfort in the same throwing arm that underwent surgery in mid-January to repair a torn labrum. The specific pain Luck previously experienced was attributed to biceps tendinitis, sources said.

If the pain returns during the throwing stage, an urgent discussion will occur for Luck to undergo a corrective surgery that involves relocating the biceps tendon that is attached to the repaired labrum, sources said.

What’s great about the Mort piece is that the sources are pretty clearly within the Colts organization, and the timing here is quite intentional. It reads as though the Colts indulged Luck his attempted rehab in Europe, but still clearly feel surgery is necessary, and are trying to make abundantly clear now (through Mortenson), that Luck could just get the surgery as soon as possible in order to play next season.

See, for example, these passages, and take a guess as to which side Mort’s sources come from:

If the pain returns during the throwing stage, an urgent discussion will occur for Luck to undergo a corrective surgery that involves relocating the biceps tendon that is attached to the repaired labrum, sources said.

The normal recovery from the tendon procedure ranges from three to six months, according to medical sources, and would not normally project as a surgery that would threaten the 2018 season.

The Colts and Luck have been aware of the possible corrective surgery when he sought multiple opinions after his setback that ultimately resulted in the team placing him on injured reserve Nov. 2. Luck chose the conservative path with treatment and rehab in Europe, sources said. The latest information has been encouraging but without the benefit of throwing the football.

You don’t exactly have to read between the lines to find the narrative the team is hoping to push out, that Luck either needs to play through what ails him or go under the knife once and for all. It’s also pretty clearly framed as Luck’s decision to opt for “conservative” treatment, as though not wanting to jump right to “having a throwing arm tendon repositioned and screwed into a bone” is some kind of inexplicable desire.

And then there’s this stinger at the end, which is an odd way to end a news report about an injured player who, by just about every account, has never done anything to deserve having his will to play questioned, up to and including playing through the problems the past few years, which is why he’s in this position now:

Luck ultimately would have the final say on whether he would have surgery if the pain returns, but the Colts would enter the offseason with uncertainty at the position it thought had secured when they made Luck the No. 1 pick in the 2012 draft and subsequently signed him to a $122.9 million contract extension in June 2016.

Won’t someone think of the Colts, and how they now might face some “uncertainty” at the quarterback position?

Let’s not forget the neck injury and subsequent nerve deterioration that ended up shortening Peyton Manning’s career also occurred while Manning was still a Colt, under the watchful eye of a medical staff that hands out pain medication like the cool fifth grade teacher hands out Jolly Ranchers. And the whole enterprise is overseen by Jim Irsay, the son of another asshole owner, a man born on third base thinking he’s a rock star because he’s too high to get the metaphor correct.

Andrew Luck would be better off staying in Europe than coming back to try and play for this team, which (as with Manning) is clearly hopeless without a generational quarterback dragging them to the postseason.