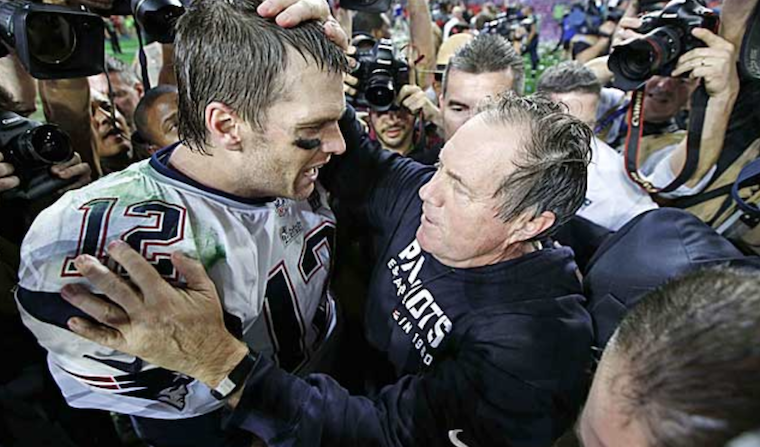 Regardless of whether the New England Patriots beat the Philadelphia Eagles in Super Bowl LII Sunday, the Pats are a dynasty. When you make it to eight championships and win at least five of them with the same head coach and star player, in this parity-drenched era in particular, you’ve earned that distinction.

The question is where the Patriots’ dynasty fits on the all-time hierarchy of dynasties in North American professional team sports.

1981-1994 San Francisco 49ers: San Francisco went to five Super Bowls over this stretch, winning all of them. They made the playoffs in all but two of those 14 seasons. But this is complicated by the fact the key players changed over the course of the run.

Bill Walsh and Joe Montana led the Niners to those first three Super Bowls, but it was Montana and George Seifert in 1989, and Seifert and Steve Young in 94. A lot of folks wouldn’t even include 1994, since the Dallas Cowboys were in the midst of a mini-dynasty of their own at that point.

1974-1979 Pittsburgh Steelers: They won four Super Bowls in a six-year span, which is something no other team has accomplished in fewer than nine. And most of the same key players were in place for all of that stretch. Pittsburgh lost just 20 games over the course of those six seasons, but New England has lost just 63 over the course of a run that has lasted three times longer.

1960-1967 Green Bay Packers: Under Vince Lombardi and Bart Starr, the Packers won five championships (two Super Bowls) in six title game appearances over the course of an eight-year period. They were mediocre before and after that, so this run was punctuated like Pittsburgh’s a decade later. No other team has ever won that many titles in such a short span.

1946-1958 Cleveland Browns: Under Otto Graham and Paul Brown, the Browns won three championships in six appearances between 1950 and 1955, but they actually went to 10 consecutive championships, winning seven, if you go back to 1946. They completely dominated the AAFC (All-American Football Conference) during those final four years of the 1940s, and they went 18-5-1 (without a championship) under Brown and with Jim Brown at running back in 1957 and ’58.

Problem is the Detroit Lions also won multiple championships during that era, and they probably don’t deserve a lot of credit for kicking ass in the AAFC.

Pittsburgh probably had the best condensed run in modern NFL history in the 1970s, while the Patriots get more credit for longevity. The Browns and Packers are right there, but keep in mind that the population of the league has doubled since then. It was a lot easier to be a perennial contender in the 1950s and 1960s than it is now.

That almost certainly makes New England’s dynasty the greatest in NFL history, but what about the other three major American pro sports? Here’s a look at the top competition the Pats face.

1996-2003 New York Yankees: Led by the Core Four and manager Joe Torre, they won six pennants and four World Series championships in an eight-year span. But it does feel as though money played a large role here.

1990-1997 Chicago Bulls: With Michael Jordan, Scottie Pippen, Dennis Rodman and head coach Phil Jackson, the Bulls won six titles in an eight-year span in the 1990s. Might have been more if Michael Jordan didn’t essentially squander two seasons with that weird mid-career retirement.

1982-1989 Edmonton Oilers: Led by Mark Messier (and of course Wayne Gretzky but for four), the Oilers won five Stanley Cups and went to a sixth over the course of eight years in the 1980s.

1956-1969 Boston Celtics: Nobody holds a candle to Bill Russell and Red Auerbach, who teamed up to win a ridiculous 11 championships in 13 years, including eight in a row. Doesn’t even matter that there were only 10 teams in the NBA then — this is off the charts.

Ultimately, I think only the old-school Yankees, Lakers, Celtics and Habs have the modern-day Pats beat, which at least means the Patriots have the greatest American pro sports dynasty in the last quarter-century.