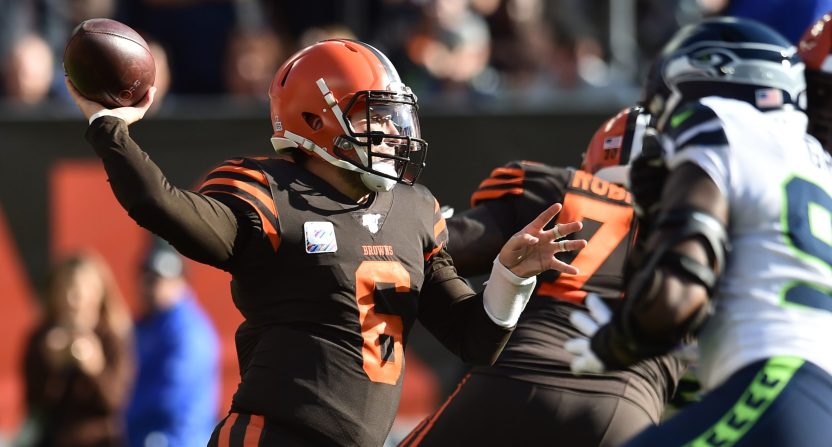 Where Baker Mayfield will play in 2022 remains a mystery. But at least one NFL team is interested in acquiring the Cleveland Browns quarterback.

ESPN’s Josina Anderson reported on Wednesday that the Seattle Seahawks are not only interested in bringing Mayfield on board but also extending his contract.

I’m told the #Seahawks still have a high-level of interest in acquiring QB Baker Mayfield and behind-the-scenes are open to contractually extending him, per league source. I also know that the process of collecting information and insights into Mayfield is still ongoing.

This drew a mixed reaction from the NFL world.

This move makes all the sense in the world for Seattle.

I’m not even kidding.

The Seahawks are built similarly to the Browns, they are run first, defense is serviceable, and the staff is more than stable at this point as is the front office. https://t.co/bP2qX0ZhGJ

Seattle being interested makes sense. Extending him though… https://t.co/WnJq96AWQi

Going from Russell Wilson to Baker Mayfield as your QB https://t.co/dbxZkwkeFy pic.twitter.com/mLhlNg0PH9

Baker Mayfield vs. Geno Smith vs. Drew Lock feels like a triple threat match that WWE ran 16 times during the pandemic https://t.co/Qbd5YT5wYm

Baker isn’t as bad as he showed last season, but I don’t think he’s good enough to lift this Seahawks team off the bottom of the NFCW.

By leaving Garoppolo as the only trade option for Carolina, they’d also potentially be doing the Niners a huge favour. https://t.co/0s3qxYav6e

There is little in the world I want more than Seahawks Twitter reacting to every single nugget of a Drew Lock/Baker Mayfield training camp battle https://t.co/eLNnHCDzS0

Bob Condotta of The Seattle Times added that he believes the Seahawks are interested but not at his current price of more than $18.5 million. So, more likely than not, the interest would be in signing Mayfield if he’s released rather than trading for him. That notion lines up with past reports.

My understanding is nothing has really changed on Seattle's stance on this — if he's released they'd be interested. But they have zero interest in acquiring him at his current contract, which obviously means there'd be a new contract of some sort. https://t.co/RzcSHyZVNR

There are multiple moving parts here. A big one, as Condotta noted, is Mayfield’s price tag. Another is a looming and likely lengthy suspension for Cleveland’s new quarterback, Deshaun Watson.

Both head coach Pete Carroll and offensive coordinator Shane Waldron have been upbeat about Seattle’s looming quarterback battle between Drew Lock and Geno Smith. Carroll and Waldron both gave an early edge to Smith.

If he can rediscover his 2020 form, Mayfield is a clear improvement over both Lock and Smith. Truthfully, even if he stays at his 2021 form, he’s probably a significant upgrade.