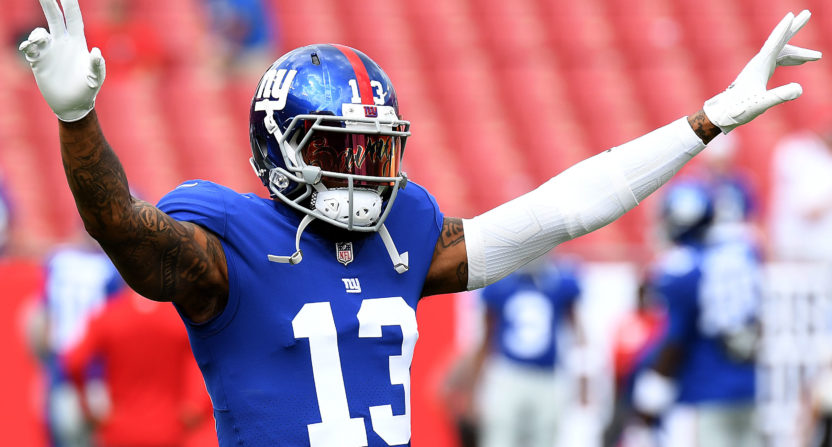 An argument can be made that no player has been more popular with fans since entering the NFL in 2014 than New York Giants receiver Odell Beckham. From his brash on-field demeanor to his memorable touchdown celebrations, Beckham has vaulted himself into becoming one of the league’s most recognizable players in just four years.

Oh yeah, and the dude can play.

The Giants receiver only appeared in four games this past season due to an ankle injury, but he was among the NFL’s top pass-catchers during his first three seasons in the league. Before 2017, Beckham finished with at least 90 catches, 1,300 receiving yards, and 10 touchdowns in each of his first three years with New York.

But despite his impressive production, some believe the talented receiver might have already worn out his welcome with the Giants. Some even think trading Beckham elsewhere would be a good decision for New York to make this offseason.

With the Giants just hiring Dave Gettleman as the team’s new general manager, is it possible that he may want to shake a few things up and send the receiver packing? Gettleman has already said that New York signing Beckham to a long-term contract “makes a lot of sense,” but never underestimate the deceptiveness of an NFL general manager.

So let’s say the Giants are actually listening to trade offers for their star receiver this offseason. Which teams around the league should be calling Gettleman over and over again like a jealous girlfriend?

More than half of the teams around the NFL would likely inquire about Beckham’s price tag, but there is one team in particular that should put forth a little extra effort in order to acquire the receiver.

A year after abandoning their longtime home city of San Diego for the bright lights of Los Angeles, the Chargers quickly realized in 2017 that just being an NFL team is not enough to get fans into their stadium. Adding a player like Beckham to their roster would even give non-Chargers fans a reason to attend the team’s games in Los Angeles.

Of course, the purpose of a team’s existence in the NFL is to win championships. However, owning a team has become more and more of a business venture during the league’s last three decades of existence.

For a team like the Chargers, whose temporary 27,000-seat stadium was consistently filled with 50 percent of the opposing team’s fans, trading for Beckham is just as much a business move as it is a football move.

When looking at an acquisition like this from a pure football perspective, though, adding the talented New York receiver would immediately improve Los Angeles’ offensive firepower. The Chargers already had one of the NFL’s best passing attacks in 2017 and having Beckham out on the field would make it even more lethal.

Los Angeles quarterback Philip Rivers is 36 years old and only has two years remaining on his current contract. It seems likely that he will just retire when his deal expires to help take care of his 19 kids. Why not add a playmaker like Beckham to the roster so Rivers can have a little more fun during his final years in the league?

Perhaps the Chargers would even make the playoffs for the first time since 2013.