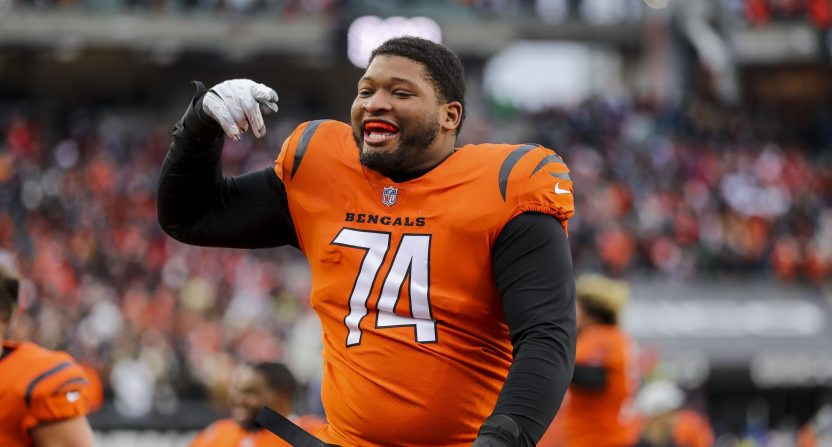 For offensive tackle Fred Johnson, his latest contract with the Cincinnati Bengals lasted all of 30 minutes. That’s not something you see every day in the NFL.

At 9:30 a.m. on Tuesday, the Bengals announced that they were re-signing Johnson, a restricted free agent, to a one-year deal for the 2022 NFL season.

However, less than 30 minutes later, ESPN’s Adam Schefter reported that the Bengals were now waiving Johnson after signing La’el Collins.

A unique one: Bengals now waiving OL Fred Johnson, per source. Johnson recently signed his restricted free agent tender, but after signing OT La’el Collins, the Bengals have decided to waive Johnson, who can be claimed on waivers. So teams and players can, and do, change minds. https://t.co/BHOA9Gd8zp

We’ve seen a lot of players decide to change their minds about signing with teams in recent days. Turns out, sometimes that decision comes from the teams too.

The Bengals have made upgrading their offensive line a major priority this offseason. So far, they’ve added three starters: guard Alex Cappa, center Ted Karras and offensive tackle La’el Collins, all of whom will be formally introduced on Tuesday. Johnson was initially going to be part of that new and improved O-line to protect Joe Burrow, signing a tender worth a minimum of $2.4 million, according to OverTheCap.com.

Since he signed that, Johnson now heads to the waiver wire where any team that decides to claim him will have to handle that cost against their own salary cap. If no one claims him, then he’ll become an unrestricted free agent and any team, including the Bengals, can sign him at a lower price.

It’s unclear if this was some kind of strategic move by the Bengals to make sure Johnson wouldn’t get picked up on waivers or just a quick change of their mind when the numbers added up.

Johnson joined the Bengals during the 2019 season, appearing in 23 games and starting eight of them.

The move brought out a lot of interesting reactions, many of which chastised those who criticize players for changing their minds when teams also do it all the time.

Teams always change their mind. It’s only wrong when players do it (According to the fans) https://t.co/mQsiEM5dva

Stop coming at players for changing their mind! https://t.co/maBhtOsbSt

I got an email once asking if I wanted a ticket in the iHeartMedia suite for a Reds game.

Then I got a reply back telling me that actually I couldn't have the ticket because some basketball coach wanted to go to the game.

This kinda reminds me of that. https://t.co/S5soSMGZww

We’ll find out soon if anyone picks up Johnson off waivers or if he’s a free agent. We’re guessing he won’t exactly be thrilled to work with the Bengals on a contract again if that happens.