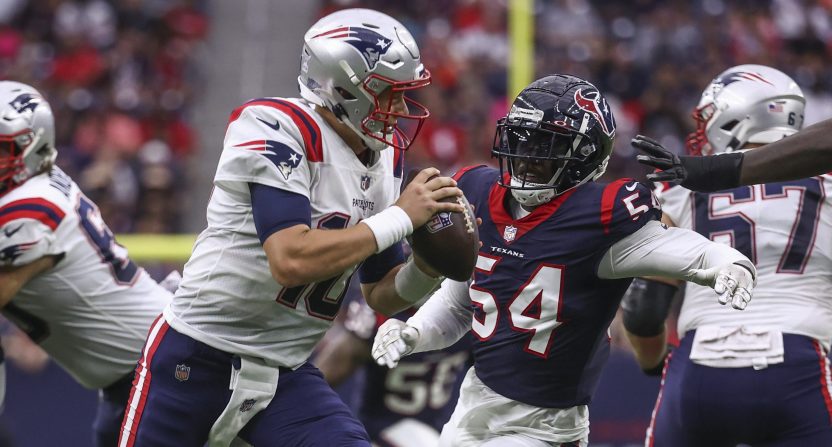 They might not be Tom Brady’s New England Patriots, but the 2021 Patriots are starting to put the pieces together as part of their rebuilding efforts. Following a tough loss to Brady’s Buccaneers last week, they scratched out a 25-22 victory over the Houston Texans this past Sunday. And much like how his famous predecessor used to do all the time, quarterback Mac Jones led the team to a comeback victory, his first in the NFL.

Jones finished the game with 231 passing yards, one touchdown, and one interception. Not exactly world-beating numbers but enough for what the Patriots need out of him right now. The rookie quarterback isn’t expected to put the team on his shoulders, but rather he’s expected to be a solid game manager who doesn’t put the team in a position to lose.

Head coach Bill Belichick was certainly happy with the effort he’s gotten out of the young quarterback and sang his praises, in as much as Belichick can do that.

“Mac gave it to us all day,” Belichick told reporters. “I thought we moved the ball. I thought he made a lot of good decisions. There were some checks that he had to make that he made throughout the day, but really the last drive was a third-down conversion to Hunter [Henry] and then we had a couple good runs in there. But yeah, Mac’s been good for us all year in terms of his leadership, his resilience, and kind of always counting on him to do the right thing, and you know, he really does it at a high level, so it’s been impressive.”

The Patriots are now 2-3 on the season and find themselves in second place in the AFC East behind the 4-1 Bills. They’ve got a big game against the 4-1 Dallas Cowboys this upcoming weekend that will give them a really good sense of whether or not they’ll be able to compete for the division this year. Regardless, the learning curve for Mac Jones continues.