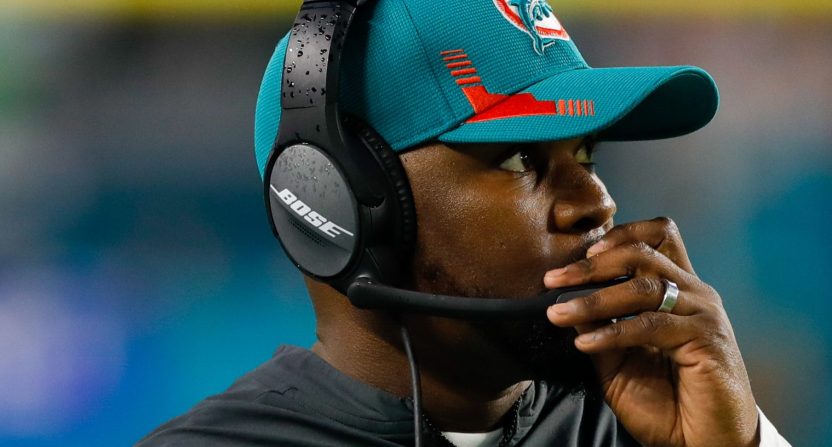 Brian Flores may be on his way to landing another head coaching opportunity very soon. Some significant news emerged on Sunday night that could have the former Miami Dolphins coach optimistic.

According to Albert Breer of NBC Sports Boston, the Arizona Cardinals will interview Flores for the vacant head coaching position on Monday.

This comes after the Cardinals requested to interview him earlier this month. This is interesting, considering some ties that he has with new Cardinals general manager Monti Ossenfort.

Flores and Ossenfort both came up in the New England Patriots scouting department, which may make Flores a more intriguing candidate for Arizona.

Flores also did real well interviewing for the AZ job in '18.

It is very interesting to see the NFL have an interest for Fores for another head coaching position. This interest comes despite his ongoing lawsuit against the Miami Dolphins and several other NFL teams. Flores sued the league and several teams for unfair treatment toward him during their head coaching hiring process because of his race.

Cardinals fans took notice of this news on Sunday night. They seemed to be intrigued about the possibility of Flores getting another shot at being a head coach in the NFL.

This would be a fascinating development. https://t.co/zsuU4FLxqS

Brian Flores certainly showed some great moments as head coach of the Dolphins, finishing with a winning record in two out of his three years with the organization.

His defensive expertise could certainly help the Cardinals if he is ultimately chosen. Regardless, whoever ends up being named the head coach of the Cardinals may go through some real struggles next year.

Starting quarterback Kyler Murray is unlikely to be back for the start of the regular season next year after tearing his ACL back in December, making for an uncertain situation in Arizona.