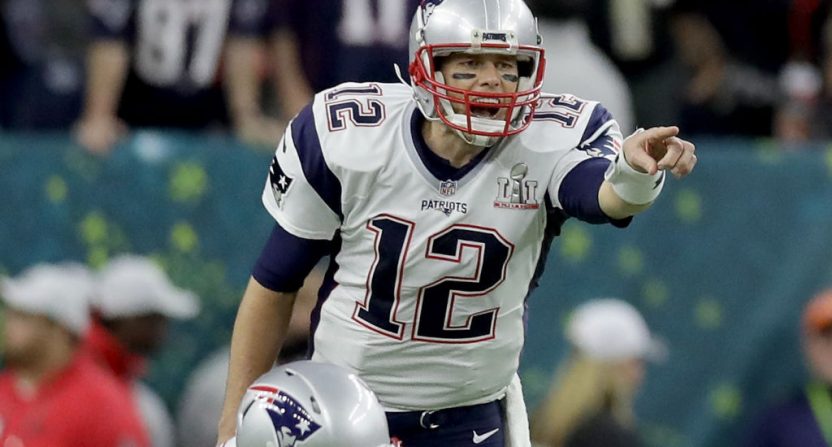 New England Patriots owner Robert Kraft met with the media at the NFL Owners Meetings on Monday in Phoenix, and said that he was told by Tom Brady “as recently as 2-3 days ago” that Brady would “be willing to play 6-7 more years” (via Boston Herald):

“As recently as 2-3 days ago, he assured me he’d be willing to play 6-7 more years,” Kraft said. “At the level he performed, there’s no one that would be happier than I and our fan base. In some ways, you think about, I think there’s one player at the age of 40 who had one good year: (Brett) Favre for the Vikings. But he didn’t do so well before (turning 40). I think Tommy’s sustained excellence is just unbelievable, and it’s a lifestyle. He’s in training now. It’s not like he’s stopped. He works out.

“I remember after our first Super Bowl in ’01, going down in the training room in the old Foxboro Stadium three days after we won, and he’s in there with the music blaring and working out. He’s really dedicated. The thing that is amazing about him, to this day, he hasn’t changed as a human being in terms of how he relates to people but also how he works out. The only thing that has probably changed is how he eats, how he diets.”

As Kraft notes, Brady keeps himself in tremendous shape and has a top-notch work ethic. And Brady is of course coming off a Super Bowl-winning season in which he threw 28 touchdowns and just two (!) interceptions. Brady looked as good as ever last season, and that’s saying something given that he’s arguably the greatest quarterback of all-time.

Brady’s season was even more amazing when you consider that he put up those numbers while being 39 years old. And that means he will turn 40 this year (in August).

So, should Brady play six to seven more seasons, we’re talking about him being 45+ years old. As ESPN Stats & Info explains, that would make Brady the oldest quarterback-only in NFL history:

If Brady were to play that many years, that would put him at age 45 or 46. The oldest in NFL history to play just QB were 44 years old: Steve DeBerg, Warren Moon and Vinny Testaverde. (It should be noted that George Blanda played until he was 48, but he was more of a kicker at that point).

And in terms of quarterbacks 40+ years old that were actually good? It’s really been only two, in Brett Favre (as Kraft mentioned) and Warren Moon.

In 2009, Favre threw 33 touchdowns and seven interceptions for the Minnesota Vikings. But he followed that up with 11 touchdown passes and 19 interceptions in his age-41 season with the New York Jets. He then retired.

And in 1997, Warren Moon threw 25 touchdowns in his age-41 season, but fell off hard in his three ensuing seasons.

Father Time is one tough customer, and a severe decline has been known to hit quarterbacks at any given time.

So, to answer the question: should we buy Tom Brady playing six to seven more seasons? Well, I think he truly does intend to at the moment. But with potential serious injury, natural decline with age, and perhaps just being mentally drained, the chances he’s actually playing at least six more seasons are probably under 25%.

However, if anyone can do it, it’s Brady. We just saw his game look at its peak at 39 years old, and it’s not like he’s a quarterback that depends on mobility. If New England’s offensive line can play like an elite unit over these next several years to keep a clean pocket for Brady, perhaps he can continue to thrive for a long while.

2 thoughts on “Should we buy Tom Brady playing 6-7 more years?”