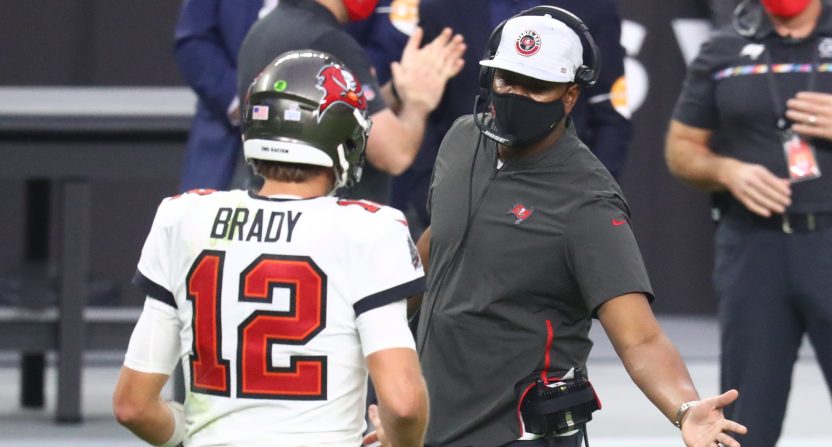 Urban Meyer was fired as head coach of the Jacksonville Jaguars following a 2-11 start and a seemingly never-ending cascade of problems, issues, and allegations. It doesn’t appear that many of the current players are too sad that he’s gone and plenty of people around the NFL think it was the right move as well.

Now comes the hard part. Who should Shad Khan hire to clean up Urban’s mess and try to return the Jacksonville Jaguars to their former selves when they came within one game of the Super Bowl in 2017. Since then, they’ve posted three losing seasons, including a 1-15 finish last year that doesn’t appear as though it will be much improved upon this year.

The Jaguars need a spark in the form of a head coach who can inspire the players and understands how to operate within the NFL. Clearly, a lot of people seem to think they know the answer and it happens to be someone with a history in Jacksonville.

Byron Leftwich is currently the offensive coordinator for the Tampa Bay Buccaneers where he was part of the team’s Super Bowl victory last year. Before his coaching career, Leftwich was a quarterback in the NFL and he started his career as quarterback for the Jaguars between 2003 and 2006. Byron also went on to play for the Falcons, Steelers, and Bucs before retiring.

After starting as a quarterback’s coach with the Arizona Cardinals, he quickly worked his way up to offensive coordinator and then joined Bruce Arians in Tampa Bay with the same role.

Leftwich was asked about the possibility at today’s press conference but he deflected pretty well.

This was just after Bucs PR said “last question…”

Byron Leftwich was asked about the opening for the Jaguars’ head coaching position. As he was walking off he said, “I’m trying to win the division.” pic.twitter.com/HMqN5NIMCd

Now, it seems that the stars may have aligned for Leftwich to return to the Jaguars in a whole new role. And a lot of NFL folks are excited about the potential.

It would be cool if Byron Leftwich was the next HC of the Jaguars.

It’s all rather easy and obvious. Fire Urban now. Hire Byron Leftwich. It would be such a massive win on every level. #Jaguars

I’m not the biggest Byron Leftwich fan as a play caller but isn’t he a home run in Jacksonville?

Jaguars have to hire Byron Leftwich as their next head coach. That's my quarterback!!!

I caught his 1st TD which coincidentally was my first TD against the Buffalo Bills in 2003. pic.twitter.com/EamFOZMmO3

We’ll see if the Jaguars end up hiring Leftwich and if he’s even interested.