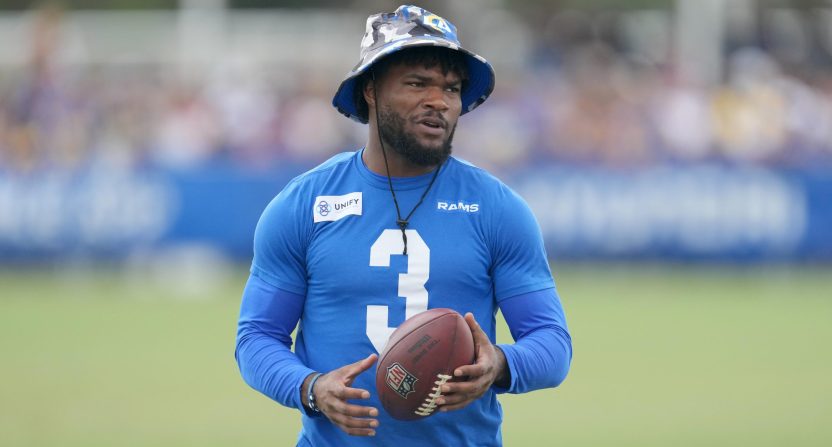 Los Angeles Rams running back Cam Akers entered the 2022 NFL season as one of the biggest fantasy football question marks.

Akers didn’t play until Week 18 last season — he proceeded to play in four postseason games for the Super Bowl champions — due to a torn Achilles suffered last July (which was originally expected to end his season). Then in this year’s training camp, he dealt with a soft-tissue injury. Additionally, he’s been in a three-year battle with running back Darrell Henderson for playing time in Sean McVay’s offense.

Well, Akers’ first game of the season didn’t exactly do anything to lessen the questions and concerns from fantasy managers (and from Rams fans, of course).

Akers had a grand total of zero yards in the Rams’ 31-10 loss to the Buffalo Bills in Thursday night’s NFL season opener. He had three carries for zero yards, and he wasn’t targeted in the passing game by Rams quarterback Matthew Stafford.

According to FantasyPros, Akers had a consensus — using outlets such as ESPN, Yahoo! Sports, and NFL.com —  average draft position (ADP) of 37th this year in standard and PPR leagues, while Henderson came in at 111th in standard leagues and 128th in PPR formats.

So, there are a lot of frustrated fantasy football managers out there right now.

Here’s a glimpse of how the fantasy football world is reacting to Akers’ O-fer in the NFL season opener:

I hope you listened to me on avoiding Cam Akers.

I hope you ignored me when I recommended Allen Robinson. 🤦‍♂️

You can officially get Cam Akers via trade for a bag of Skittles.

We have our first fantasy football question of the year: where in the world is Cam Akers?

Darrell Henderson played 76% of the Rams' snaps when Cam Akers out during Weeks 1-12 last season.

He played 82% with Akers active tonight.

Cam Akers managers watching Darrell Henderson get all the workpic.twitter.com/EYJvHBOPBS

When you drafted Cam Akers pic.twitter.com/TAwkh9Kywi