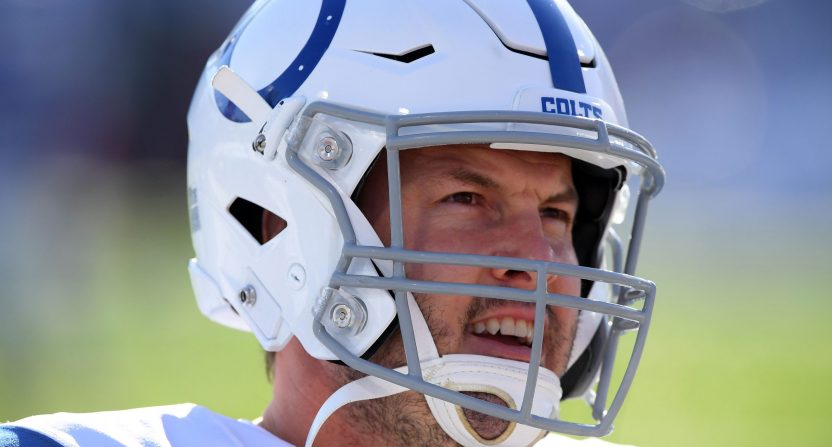 To be clear, this isn’t a slight to the Bills. Josh Allen looked very good for almost the entire game, putting up a 26/35, 324 yard performance with two touchdowns and no interceptions.

Josh Allen caps off the Bills drive with this touchdown pass to Dawson Knox, after initially looking to run. pic.twitter.com/THwWwZxJ71

Allen also rushed for 54 yards and a score, and was easily Buffalo’s biggest ground threat against the solid Colts defense. This fourth quarter strike to Diggs looked like it was going to seal the win for Buffalo, thanks in part to the Colts missing one field goal and being stopped on 4th and goal at the end of the first half.

Beyond that, Indianapolis burned two timeouts questionably early in the second half, once to prevent a delay of game on 1st and 10 and once to challenge a play that was obviously not going to be overturned. Despite all of that, the Colts still had a chance, with a late touchdown putting them within three.

Philip Rivers to Jack Doyle for the Colts TD (they also connected for the 2-point conversion). Not the best defense from Buffalo here. pic.twitter.com/rbgch3BVEC

After a wild ensuing drive that saw Buffalo move the ball across midfield only to have Josh Allen fumble on a sack that the Colts almost recovered, losing twenty-three yards. The Colts took their final timeout ahead of the two-minute warning, and got the ball with a chance to drive for a tie or even a win.

That didn’t happen, thanks in large part to a weird lack of urgency by Philip Rivers.

On one of the Colts bigger plays, though, receiver Zach Pascal appeared to fumble; it was ruled down on the field (understandably, given the nature of the play) but on replay it looked pretty clearly like a fumble, recovered by the Bills.

In #INDvsBUF, the ruling on the field is that the runner was down by contact. The was no clear and obvious visual evidence to overturn the ruling, so it stands. pic.twitter.com/1QmUW2Sjcj

IMO, this should've been overturned to a fumble. The visual evidence appears conclusive that the first contact from the Buffalo defender occurs after Zach Pascal's knee is lifted from the ground. Since there's also a clear, immediate recovery, Buffalo would have got the ball. pic.twitter.com/bQ5tkAc1a2

After being pretty much gifted by a weird ruling, the Colts still couldn’t convert. Needing to get closer than most teams due to Rodrigo Blankenship’s lack of reliability from distance, Rivers couldn’t work the sidelines due to a lack of arm strength. That left the Colts facing a Hail Mary with four seconds left, which Rivers stayed in to attempt.

He couldn’t get it to the end zone, and the Bills won their first playoff game since 1995. They’ll host at least one more game, too, and there’s a chance of snow in Buffalo next weekend. Sign us up.