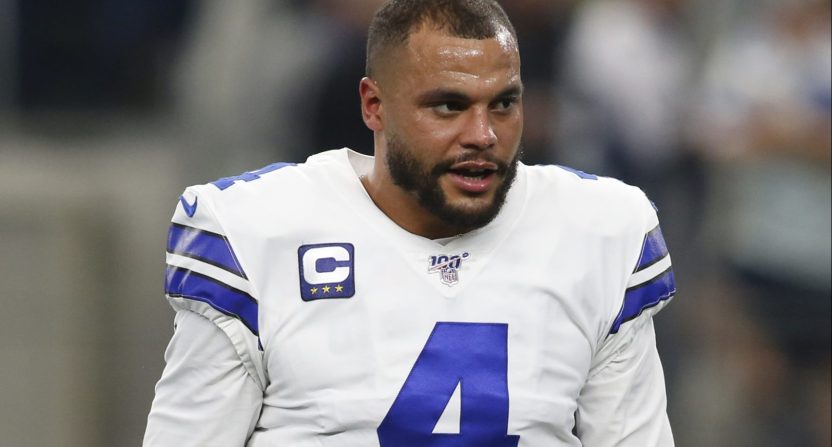 It was a wild finish in Sunday’s matchup between the Dallas Cowboys and the San Francisco 49ers yesterday filled with controversy.

Dallas found themselves down 6 points with 32 seconds left, in need of a game-winning drive to keep their playoff hopes alive. The Cowboys ultimately ran out of time after getting into 49ers territory on this controversial play.

Dak Prescott ran a QB draw with 14 seconds left and handed the ball to the center, who placed the ball himself.

However, the ref is supposed to spot the ball.

The move cost Dallas a chance at a game-winning play. The 49ers advance.

Tony Romo explaining why it was Dak’s fault for not giving the ref the ball on final play pic.twitter.com/HTqhAjfGnw

In this clip, you can see that the referee has some issue getting to the ball in time to spot it so the Cowboys can get the spike off for one last play, and Cowboys fans and players alike were not happy with this result.

Players on both teams were looking around waiting for an explanation on whether or not the game was over, and ultimately no more time was given to the Cowboys on this final play.

After the game, Cowboys fans were clearly upset at the result, as they were throwing trash and other items onto the field as the refs were running off the field.

#Cowboys fans throwing things at their own players. Got this sent to me by one. Be better fans wow! pic.twitter.com/mlVttbFlpg

Cowboys quarterback Dak Prescott was asked in the postgame press conference about the end of the game, and in particular about the fans throwing trash onto the field after the result.

.@dak follow up on the plastic bottles being thrown at refs. pic.twitter.com/NXO5Mp2wjA

At first, Prescott thought that fans were throwing the debris at Cowboys players.

Once Prescott realized that the refs were the targets and not Cowboys players, he said “Well credit to them then.”

“If they weren’t throwing it at us, the fans felt the same way as us. That’s what they were doing it for. I guess that’s why the refs took out of there so fast. I am sure everybody is upset with how this played out, and the fans feel the same way that we do.” Prescott added.

Many have been blasting Prescott on these comments after the game.

Dak Prescott blaming the referees after no-showing the majority of the game is some embarrassing stuff from a $40M quarterback.

.@ShannonSharpe on Dak crediting fans for throwing trash at the refs:

"I have huge problem with this, that's bush league, Dak Prescott. Officials always run off the field. Why are you encouraging your fanbase to throw trash?" pic.twitter.com/C4jSuKXJOV

This was obviously right after the game and Prescott was obviously heated about the situation still, but it’s pretty low for him to encourage fans who were throwing trash at the referees. He can definitely expect a fine coming from the NFL soon due to these comments.