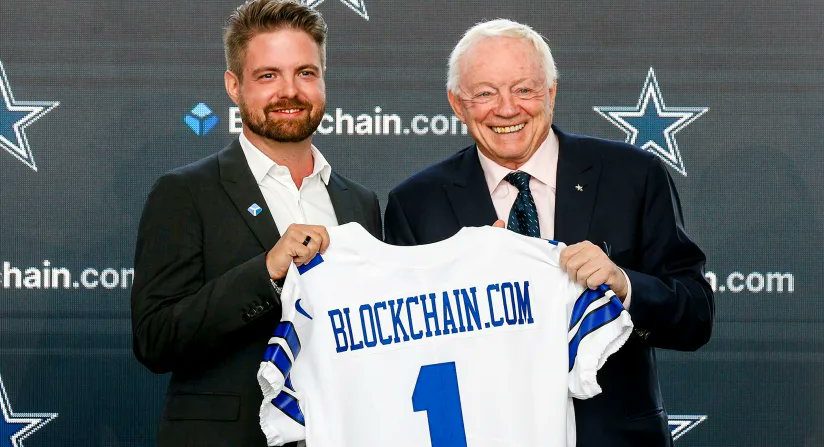 The Dallas Cowboys haven’t won a Super Bowl since the 20th century but they’re clearly looking to the 21st century and beyond thanks to a new deal that makes them the first NFL team with an official cryptocurrency partnership.

The Cowboys announced Wednesday that they had formed a partnership with crypto marketplace Blockchain.com, which includes branding, advertising, content, and event opportunities. The partnership will also create “ways for fans to quickly access Dallas Cowboys content and their Blockchain.com Wallet.” Cowboys fans will also be able to get access to exclusive experiences and rewards through the service.

“Blockchain.com is one of the oldest and most trusted digital asset platforms in the world, has easy-to-use products, and remains relentlessly focused on customers,” said Cowboys owner Jerry Jones in a statement. “They are bringing Wall Street to Main Street by making digital assets available to anyone, anywhere in the world – and that’s a touchdown for our millions of global fans. We take pride in being the first team in the NFL to sign an official cryptocurrency partnership, and are proud to venture into this innovative business with Blockchain.com.”

The NFL had announced in March that teams could form limited blockchain sponsorships, but there are still bans on cryptocurrency promotions, crypto gambling and fan tokens for the time being.

Jerry Jones says Cowboys, per league rules, cannot pay players in cryptocurrency yet—but he’s “optimistic” that will evolve. https://t.co/QrhlKY8Zlp CEO Peter Smith says they plan to keep working on the NFL over the next 10 years 👀 pic.twitter.com/TBDfxCPzvY

When news leaked of an impending big announcement, some Cowboys fans got excited that it might pertain to a big signing or some news to improve the team on the field. However, the crypto announcement garnered a different kind of reaction when it was made clear.

How many touchdowns did Blockchain have last year? https://t.co/RBUytMwK9J

The Cowboys have spent tons of money without much to show for it for decades so this feels like an ideal match. https://t.co/jkkAaCleQL

Dallas won the East & went 12-5 last year. 3 teams in the division have questionable QBs & talent. Almost guaranteeing 2-3 yrs of East dominance. Does Dallas go all in? Do they load up on talent? Do they make a run for the title?

No, they focus is on sponsorship. https://t.co/lGoy9wGmJ1

If any team owner was going to jump into bed with crypto first, it was always going to be Jerry Jones. However, if the Cowboys can’t improve on last season’s 12-5 record and disappointing playoffs run, not too many Dallas fans will be that excited about their partnership announcements.