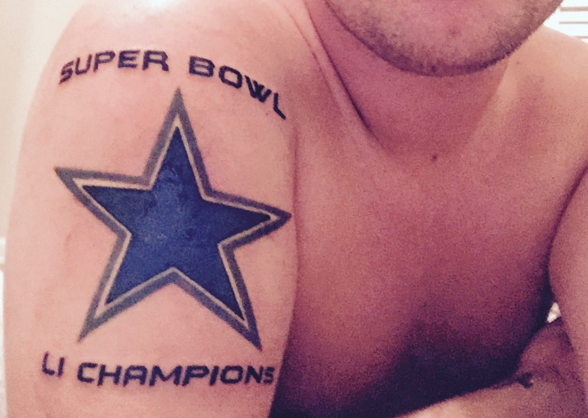 Looking at fan tattoos that have made news the past few years, it’s safe to say that fans getting championship tattoos before their team is on the podium holding up the trophy is now officially a trend.

The latest example comes from a Dallas Cowboy fan. With the Cowboys looking to be a major factor in the NFC Playoffs come January, one fan has already declared Dallas the winner of Super Bowl LI… in ink, on his arm.

Just with this guy’s tattoo, how plain can you be? I mean, if you’re going to be bold and get inked like this, at least give it some pizazz.

Now, back to the bigger picture. I’m guessing this isn’t the first person you’ve heard of doing this. Well, you’re right. A number of fans have gone out on a limb with these tattoos.

It happened in 2014, when the Kentucky basketball team was looking to go 40-0…

Rock Wright's new tattoo. He's positive it will be accurate after the tournament. @WLKY #WLKYRTFF pic.twitter.com/MGxrgFyrQ3

And during this year’s World Series with a fan of Cleveland sports.

Some call it bold, but I call it faith in Kluber @Indians #rolltribe pic.twitter.com/bbwHWOYuT5

Well, Mike. I wouldn’t call it bold. I would just call it stupid. But he’s not the only: One Cubs fan actually got a World Series tattoo right before Chicago broke its World Series drought. But let’s not give him too much credit.

Of course, there are more NFL fans that have been this stupid.

Patriots fan says he got a Super Bowl 50 tattoo on Friday (via @wmur9, @jalcantaraabc) pic.twitter.com/sCVYDFwNJL

Looking at all of these pieces of art, I think most of us can agree that this is one of those dumb trends that needs to be stopped already. Even though some fans might say they do this ridiculous act to show their support of their team, my guess is they’re doing it to end up on sites like this one. Hopefully, this display of stupidity won’t be newsworthy much longer.