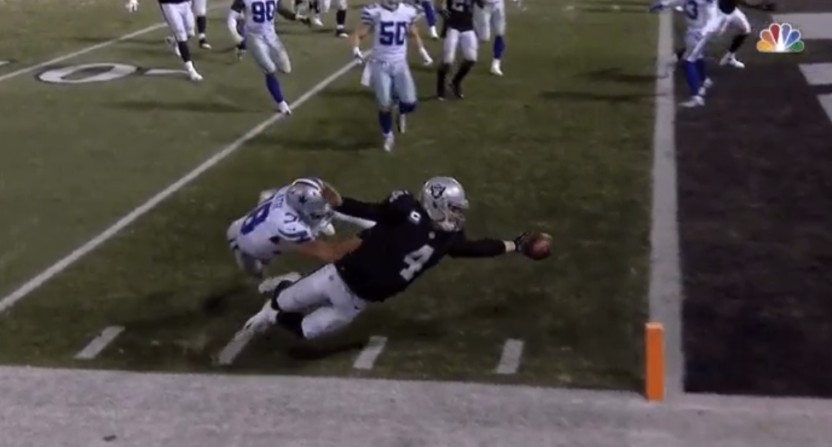 With less than a minute to play and the Raiders down three points, Oakland quarterback Derek Carr scrambled for a first down then dove toward the pylon in search of a go-ahead touchdown. But in desperate attempt to score, Carr let go of the ball a half yard before the end zone, and it trickled out of the end zone. According to one of the least sensible rules in sports, that meant the Cowboys took over possession from their own 20-yard line, sealing the game for Dallas.

Here’s a slo-mo view that clearly shows Carr losing control before he reached the goal line.

The touchback rule has popped up in the NFL several times in recent weeks, and each instance only further drives home its absurdity. If you fumble out of bounds, you keep the ball where it went out. If you fumble out of the end zone… the other team gets the ball? Why would we just presume the defense recovers? It’s totally counterintuitive.

The fact that a nonsensical rule essentially decided a key game went over about as well with football fans as you’d expect.

You gotta feel for Carr. He was just going for the win and fell victim to the dumbest rule in the NFL. The Catch Rule is the most problematic, but fumbling out of the back of the end zone and it being a touchback is one of the dumbest rules in the NFL

How hard is this? If a team fumbles forward into the end zone, it's a 10 yard penalty. Offense keeps it, next play from the 10. Want it more severe? Make it the 15 or 20. Whatever. Anything but this ridiculous rule.

One of the dumbest rules in the NFL rears it's ugly head again. Good call. Stupid rule

the rule should be if you fumble out of the other team's end zone, *you* get the ball at the 20

When a team fumbles backward out of its own end zone, it lost yards and displayed ineptitude, but when a team gets to the opponent's 1, it displayed skill and effort to get there.

A loss of possession comes down to a few inches?

It has NEVER made any sense.

I just went on this rant two weeks ago, because it keeps happening https://t.co/q1yEHV8Ehf

Maybe Carr should have known better than to stick out his arm for the pylon when he had the first down and plenty of time, but that doesn’t change the fact the Raiders lost because of a rule that defies all logic.

As Carr and the Raiders walked off the field with their heads down, it was tough not to reflect on arguably the two most hated rules in the NFL deciding games only a few hours apart.

Just another day in the NFL, where all of a sudden everything that can go wrong does.