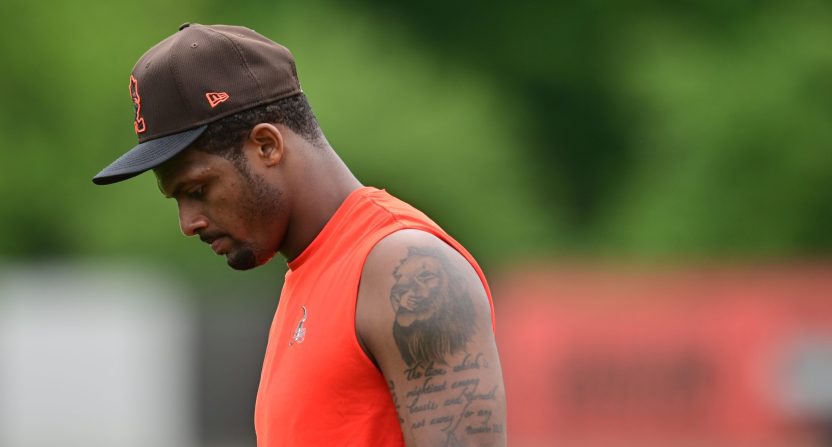 A day after a 24th woman sued Deshaun Watson over allegations of sexual assault and harassment during massages, the New York Times published a report by Jenny Vrentas that reveals the NFL quarterback met at least 66 women for massages over a 17-month period, far more than was previously known and admitted to. The report also infers that his former team, the Houston Texans, played a role in enabling Watson to keep his indiscretions under wraps.

Watson has said publicly that he hired about 40 different therapists across his five seasons in Houston, but The Times’s reporting found that he booked appointments with at least 66 different women in just the 17 months from fall 2019 through spring 2021. A few of these additional women, speaking publicly for the first time, described experiences that undercut Watson’s insistence that he was only seeking professional massage therapy.

One woman, who did not sue Watson or complain to the police, told The Times that he was persistent in his requests for sexual acts during their massage, including “begging” her to put her mouth on his penis.

It’s a damning report on top of everything else that Watson has already been accused of, all of which he has denied so far. It also seems to imply that the NFL will have plenty of reason to suspend the Cleveland Browns quarterback for a substantial amount of time, regardless of the fact that criminal charges were not pursued against him.

The details and allegations in the NY Times report are pretty disturbing and seem to cement a pattern that was fairly established already by the 24 women who have sued Watson. And based on the reaction to the report from the NFL world on social media, it does not appear that Watson will be a welcome figure this upcoming season.

There’s a lot in here to unpack, but one thing of note: Not all of these women sued Watson—but some still came forward with similar stories of sexual misconduct. https://t.co/BfdRhOs43a

The Cleveland Browns decided to give this man $230 million in guaranteed money.

If they had any sense, they'd be looking into how guaranteed that is right now. https://t.co/VzUJXO3Dtv

It's pretty clear Watson has a serious problem. And the Browns should be humiliated for what they've done in rewarding him. https://t.co/1CmN6NJKxe

Of all the awful things in here, the cynical use of allyship is right up there:

"Watson regularly presented himself as an ally to businesswomen. In the suit filed this week, the therapist alleged that he told her that he 'really wanted to support' Black businesses" https://t.co/PPvxdTemrX

Lawyers (and judges) look for patterns of behavior from defendants.
This reporting, and reporting before this, discusses very consistent patterns of (disturbing) behavior towards dozens of women. https://t.co/Bgt33Azdhp

There is masterful and comprehensive reporting here from @JennyVrentas that includes some top shelf investigative work on Deshaun Watson. It also previews — once again — what a portion of a Watson civil trial will look like. Pay particular attention to the deposition exchanges. https://t.co/uwrVA0n6Az

Cleveland Browns: We investigated the matter, it's all good.@JennyVrentas: About that … https://t.co/gfMjCUoLjz

You gotta be a special type of poison-brained Browns fan to blindly trust and support Watson at this point. Reassess your relationship with sports. https://t.co/fXLm3OTBPo

As much as the Cleveland Browns and the NFL might want this news cycle to go away, it’s clear that’s not going to happen anytime soon. Nor should it be until someone involved in those organizations does something resembling accountability.