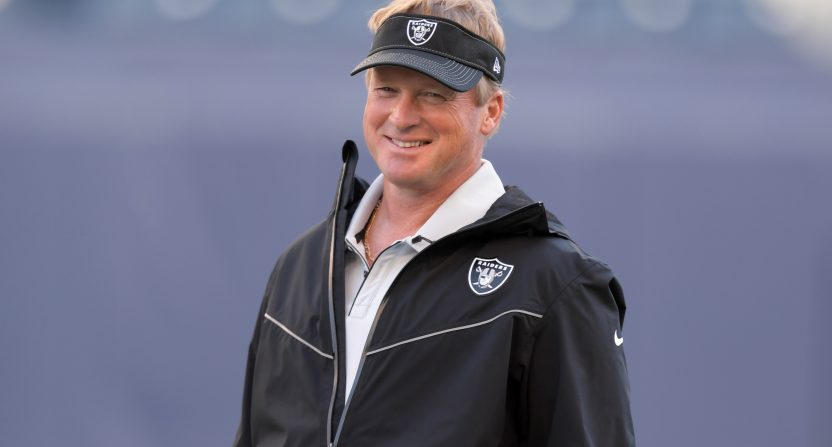 Fourteen months ago, the Oakland Raiders were widely and loudly lampooned for their decision to trade away superstar edge-defender Khalil Mack, even though the Raiders received two first-round picks, a third-round pick, and a sixth-round pick in exchange for Mack, a second-rounder, and a conditional fifth-round selection.

That’s a hell of a lot of draft capital, but it still seemed like an odd decision for a team that was building around Mack and was in need of good PR as it prepared to relocate to Las Vegas.

But that relocation was delayed by a year, and Oakland’s semi-rebuild has seemingly been expedited. Meanwhile, the team that acquired Mack, the Chicago Bears, are stuck in a rut.

Did the Raiders actually win the Mack trade?

Chicago won the NFC North thanks in good part to Mack’s contributions last season, but he hasn’t been as effective this year and the team is just 3-5. It looks as though they’ll fail to win a playoff game in each of their first two seasons with Mack on the roster.

Meanwhile, Oakland used its initial first-round selection from Chicago on running back Josh Jacobs, who as the league’s seventh-leading rusher is probably leading the Offensive Rookie of the Year race entering the home stretch. Thanks in part to Jacobs, they’re 4-4 and just a game out of a playoff spot in the AFC. That conference is wide open, and the Raiders hold the head-to-head tiebreaker over the team currently holding the last wild-card spot.

Oakland has a better chance at winning a playoff game than Chicago.

What’s more, Chicago’s struggles and Oakland’s surprising success means the Raiders might wind up with a far-better-than-expected first-round pick next year. They’re currently projected to pick 11th and 16th, while Chicago’s second-round pick from Oakland takes a hit every time the Raiders win.

Mack isn’t replaceable, but he’ll count $26.6 million against the Bears’ payroll next season. That’s money the Raiders can spread stretch out pretty wide. They’re on track to have five top-100 picks in the 2020 draft, the roster is already loaded with promising young players (Jacobs, tight end Darren Waller, left tackle Kolton Miller and cornerback Trayvon Mullen, to name a few), and they’re on track to enter the 2020 offseason with more than $70 million in salary-cap space.

By comparison, the Bears are slated to have less than $12 million to spend.

Mack will be 29 years old at that point, and it’ll be fair to wonder if he’s seen his best days. He hasn’t made as many splash plays as we’re used to seeing this year, and his numbers look to be declining slightly. That’s far from ideal considering how costly he is.

He’ll handcuff the Bears in free agency for years to come, which could be problematic for a team that clearly has significant holes elsewhere. Meanwhile, the Raiders can operate almost unencumbered as they gain steam en route to Vegas.

Does that mean Jon Gruden’s a genius? Maybe. Or maybe he gambled and got lucky. We don’t know for sure who won this trade just yet, but after being condemned out of the gate, Gruden and the Raiders are suddenly leading.