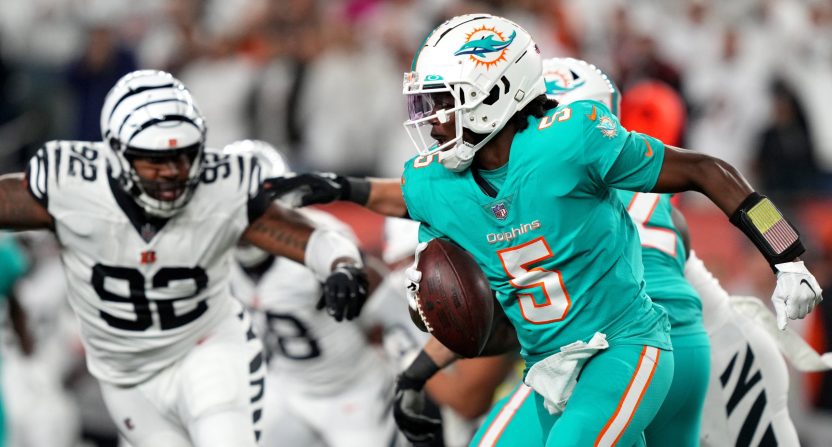 While the NFL world waits to hear more details on the situation surrounding Miami Dolphins quarterback Tua Tagovailoa, especially in regards to how he does in concussion protocol, the team has a plan in place for their starter in his absence.

Dolphins head coach Mike McDaniel told reporters on Friday that Teddy Bridgewater will be the team’s starting quarterback until Tua is available.

“Teddy would start and guys have a lot of confidence in him and guys have confidence in our whole quarterback room, really,” McDaniel told reporters. “It’s one of the strengths of our football team and I think guys rely on that. Tua, Teddy, and Skylar [Thompson] have performed in a great working group and our guys believe in all three of them.”

Bridgewater was 14-of-23 for 193 yards, one touchdown, and one interception in relief of Tua on Thursday.

Bridgewater gives Miami the veteran leadership it will need to get through this stretch, especially since there’s no timetable on Tua’s return. “You’re in the protocol until you’re out of the protocol,” said McDaniel on Friday.

While rookie Skylar Thompson played well in the preseason, he still has a lot of growing and learning to do.

“Skylar has been what you guys know Skylar to be,” McDaniel said. “He’s just working constantly and when he’s on the field, he’ll make some plays. He’s in a great spot, too. I feel very fortunate to have those two guys.”

We’ll see how things go for Teddy and the Fins when they try to rebound from Thursday’s loss next weekend against the New York Jets.