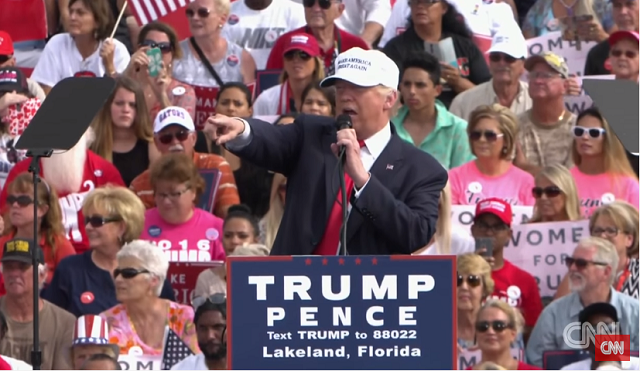 Republican Presidential nominee Donald Trump, a well-known bad opinion-haver, offered the world his take on the NFL’s concussion crisis on Wednesday. And, like most of his takes, it was quite a doozie.

However, he is still the Republican nominee for President, and that gives his inane ranting otherwise undeserved newsworthiness.

The comment was brought about when a woman in the crowd at his Florida rally fainted and had to be helped out, only to return minutes later. Trump, upon discovering this bit of information, felt a comparison to the NFL and its struggle to manage concussions was apt. It went about how you would expect.

“That woman was out cold, and now she’s coming back,” Trump said. “See? We don’t go by these new and very much softer NFL rules. Concussion: Oop, oop! Got a little ding on the head. Nope, you can’t play for the rest of the season. Our people are tough.”

Trump naturally spun this as a reflection on the state of America in general. The NFL is declining just like the country as a whole, and he is the only one who can fix things.

Trump also fired shots at the league back in January, calling the NFL “soft” for penalizing head-on-head hits and lionizing the league of yesteryear.

Trump clearly fails to grasp the severity of concussions here, but if this was the same approach he took to his own concussion treatment, it would explain a lot.

For many sports fans, it is obvious why Trump would have an axe to grind with the NFL. But, if you weren’t aware or just forgot, here is a primer on his history with the NFL and professional football in general. Football and Trump just don’t mix, and Wednesday was yet another example of this.