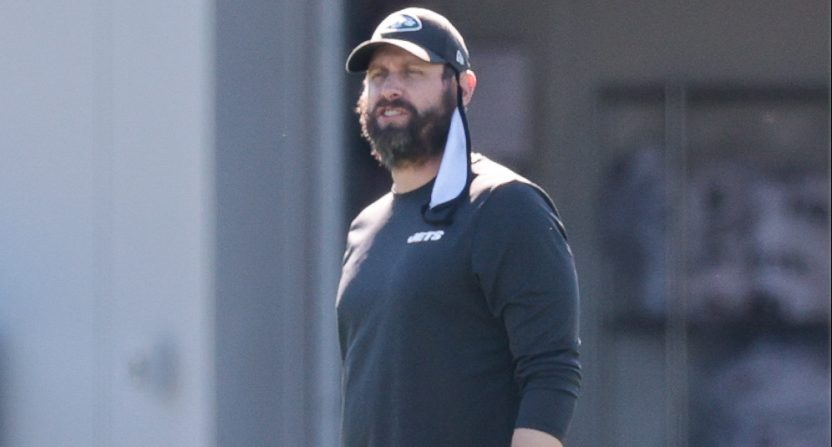 The 2020 NFL season might only be 32 games old, but some teams have started so horribly that their head coaches could already be in peril. Here’s a look at five coaches who should already be on the hot seat entering Week 3.

The New York Jets aren’t a dumpster fire only because they lost C.J. Mosley, traded Jamal Adams, and suffered several key injuries in the last six weeks. It goes far beyond that, and Gase’s inability to squeeze a semblance of competitiveness out of his team is concerning.

Besides, why should we give him even a trace of the benefit of the doubt? This is a complete embarrassment:

Where offensive specialist Adam Gase's offenses have ranked in his five seasons as an NFL head coach:

Quinn saved his job when the Falcons rallied to finish 6-2 after a 1-7 start in 2019, but it’s beginning to look as though that was an aberration that couldn’t be sustained into 2020. Atlanta is 0-2 and well on its way to a third consecutive losing season, which is just silly when you have Matt Ryan and Julio Jones on offense.

The defensive specialist has the league’s 32nd-ranked scoring defense, which isn’t even an outlier.

The DeAndre Hopkins trade looks terrible. Quarterback Deshaun Watson is off to a rough start, as is the entire O’Brien-run Texans offense. Houston is 0-2. They’ve been outscored by 14-plus points in each of their losses, and the schedule doesn’t get a lot easier in the coming weeks.

If the Texans continue down this path, especially offensively, and if Hopkins continues to perform at an All-Pro level with the Arizona Cardinals, O’Brien — who is a mere 52-46 in six-plus seasons with a talented Houston team — might finally be let go.

Bill O'Brien is still coaching the #Texans in the first quarter inside NRG. Thankfully, there are no fans. He would be booed out of the stadium right now.

Considering the talent on the Detroit roster, this has become ridiculous. Patricia’s Lions aren’t just 0-2 — they’ve won just six times in their last 28 games dating back to his debut season. And when you put his record with the Lions up against that of his predecessor, it becomes even more difficult to imagine him lasting another abysmally disappointing season in Detroit.

Jim Caldwell in four seasons as the Lions head coach: 36-28

Matt Patricia in two-plus seasons in relief of Caldwell, with arguably more talent: 9-24-1

You wonder if Jacksonville’s tank-job will buy Marrone more time, as could the fact his Jaguars shocked the Indianapolis Colts in Week 1. But this roster has lost so much talent and this team is so volatile that things could go downhill fast in Jacksonville. If management decides it wants to start from scratch with a new quarterback in 2020, it might also figure that’s a good time to make a coaching change.

Even with quite a lot of talent the last two seasons, Marrone’s Jags were just 11-21. He might not be expected to make the playoffs with these Jags, but he’ll need more results like the one against the Colts.