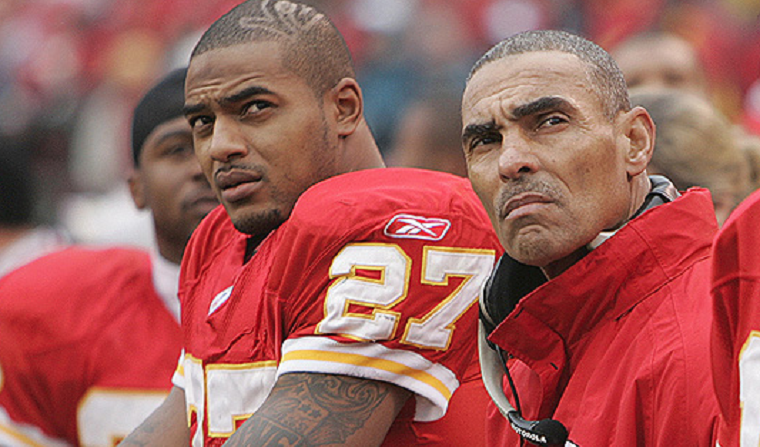 Unfortunately, it is no longer a surprise when we learn about a former NFL player dealing with various health concerns and struggles years after playing his last down in the league. Former Kansas City Chiefs running back Larry Johnson is now the latest player to reveal that he believes he suffers from CTE, six years after playing his final game.

In a profile by The Washington Post, Johnson explains the struggles he currently deals with and admits having to fight demons that cause him to think about committing suicide. The former Penn State star says he suffers from various warning signs that suggest CTE, like paranoia and anxiety. On top of that, Johnson says his memory has eroded to the point where he does not even remember certain points in his playing career and that prevents him from being able to share some stories about his past with his seven-year-old daughter.

“If I can’t remember who I was, I’ve got YouTube; I’ve got music videos that I’m making for myself, so when I watch these things I can remember,” Johnson told the Post‘s Kent Babb. “I’m trying to get these things in order so she knows who I am and what I came from.”

For Johnson, the reminders of what CTE could potentially do to a person are constantly out there. He goes so far as to compare himself to former New England Patriots tight end Aaron Hernandez. Johnson has had his violent past, although never to the same extreme as Hernandez, who was found guilty of murder in 2015. But the unraveling of Hernandez hit home for Johnson as he looked at the comparisons between them.

“I could be Aaron Hernandez,” Johnson said of Hernandez’s violent past that ended with suicide in a jail cell. He went on to wonder aloud if Hernandez was dealing with similar thoughts that he sometimes contemplates.

“The same way Aaron thought: I’m going to be gone from this world, but I’m still going to be able to take care of my child, because that’s all I care about,” Johnson said, drawing to the idea that Hernandez’s family would be taken care of as a result of his suicide.

Johnson played in the NFL from 2003 to 2011. During his time in Kansas City, Johnson emerged as one of the top running backs in the league in back-to-back seasons in 2005 and 2006 rushing for 1,750 yards and 1,789 yards, respectively. That meant a lot of carries, with an NFL single-season record of 416 in 2006 and 336 the previous year. (Compare that to last season’s NFL, when Ezekiel Elliott led the league with 322 carries, the only running back to surpass 300 rushes.)

In 2009, Johnson was waived by the Chiefs after coming back from a suspension for conduct deemed to be detrimental to the team. He was closing in on the franchise’s all-time rushing total held by Priest Holmes. Johnson then signed with the Bengals for the remainder of the season, following that by inking a three-year contract with Washington. But he was released by the Redskins before the end of September of 2010.

After sitting out the 2010 season, Johnson signed with Miami, where he once again was cut, this time before the start of the season. He returned to the Dolphins for a brief stint to fill a roster spot for an injured player, but stuck around for just one game. His one rushing attempt for two yards in a loss to the Texans would be his final rushing attempt of his career. He has since gotten into a few legal issues related to a domestic violence incident in Las Vegas in 2012 and an altercation at a Miami bar in 2014.

Johnson attempts to keep himself in a good place by focusing on raising his daughter and blocking out any negativity where it can be avoided.

“You kind of create your own prison,” Johnson said. “I’ve kind of barricaded myself in my surroundings [with] certain things that I can handle. That’s kind of how I beat it.”

Because CTE cannot currently be diagnosed until after a person dies (though advances are being made in that area), Johnson and his friends and family can only speculate as to what is going on. Given the growing amount of research regarding football and CTE, the nature of the running back position in the league and how much Johnson carried the football during his career, the odds are probably pretty good Johnson has the degenerative brain disease. We may not know for sure for a long time, as long as Johnson keeps his life in a good place and keeps fighting off those demons.

In the meantime, Johnson’s post-playing career story will be yet another reminder of the long-term impact playing football can have.