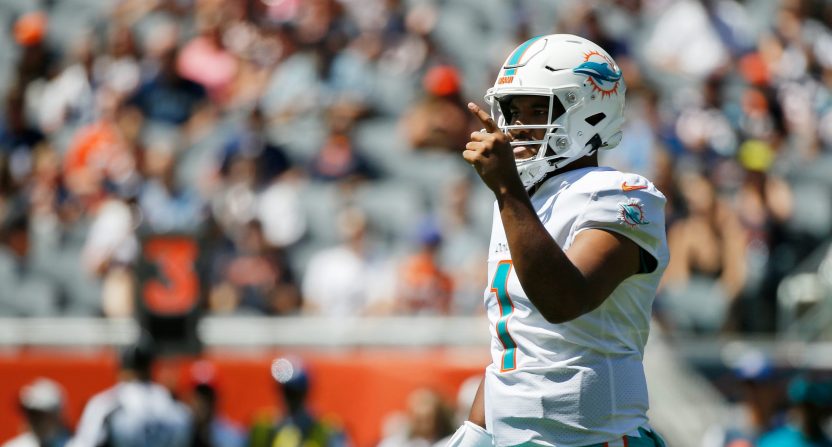 NFL teams change quarterbacks more than ever. Stars are becoming available at an increased frequency, and we get an influx of first-round rookies every year as teams target the coveted “star QB on a rookie contract” situation.

Obviously, a QB’s performance can make or break a team’s season. Let’s take a look at some signal-callers who enter the 2021 season with something to prove, whether it’s because they’re trying to win a job, prove they’re the future, or make a deep playoff run:

In his rookie year, coming off an injury, Tagovailoa showed some promising signs. He went head to head with Patrick Mahomes in a six-point loss to the Chiefs in Week 14, throwing for 316 yards and keeping pace with Kansas City’s offense. He generally avoided interceptions and showed flashes of the brilliance that made him stand out at Alabama.

But overall, Tagovailoa didn’t have a productive rookie season. He ranked 29th in the NFL in adjusted yards per pass attempt and 29th in completion percentage. As a runner he was limited, picking up a handful of first downs but not adding consistent value as a scrambler.

Rumors have swirled this offseason that Miami might be interested in trading for Houston Texans quarterback Deshaun Watson. It’s unclear why anyone would want to do that right now, but those rumors mean that Tagovailoa is under extra pressure to come through on the expectations that come with his draft status. The Dolphins added weapons on offense, most notably sixth-overall pick Jaylen Waddle. Tagovailoa played well in the preseason. The Dolphins’ next steps at quarterback will depend on whether he takes steps forward this season.

Cousins is pretty much the epitome of average in the NFL. That has plenty of value, as teams have won big with a lot worse. The Vikings have surely considered this as they navigated the full Kirk Cousins experience over the past three seasons. They’re paying him a lot of money with few ways out of it. They’re locked into average quarterback play, and it’s up to them to put a good enough team around him to contend.

It’s not like they’ve done a terrible job of that, in all honesty. They moved on pretty seamlessly from Stefon Diggs last year, with Justin Jefferson stepping into his role. But they went 7-9, and the defense struggled. Cousins went stretches looking erratic and mistake-prone before turning it around.

Above all else, they need a lengthy stretch of consistent play from Cousins — who’s refusing to get vaccinated — if they’re going to make the playoffs. An above-average season from Cousins changes this team’s immediate outlook.

As The Comeback’s Michael Grant wrote recently, Winston has an obvious motive for playing well: he could earn himself a huge payday. He’s on a one-year prove-it deal, and now that he’s won the starting job in New Orleans over Taysom Hill, he has a great opportunity to prove he’s worthy starting QB.

For all of his flaws, it’s hard to dispute that Winston has been very productive as a quarterback in the NFL. He throws for a lot of yards and a lot of touchdowns. He simply gives too much back with the turnovers. That doesn’t mean he can’t win games, and it’s possible that with this skeleton of a Super Bowl contender, he could find a way into the playoffs. It would certainly help if Michael Thomas comes back in due time.

Cousins proves that there’s a market for average quarterbacks. Winston, pending a great 2021, fits that description. This year he can prove that he’s overqualified to be a backup and can be the kind of player that can win with good pieces around him.

After three years of futility with the New York Jets, Darnold has a chance to play for a competent team this year. His offensive line won’t be much better (the Panthers have had significant turnover there), but he has a nice collection of skill position weapons, including Christian McCaffrey, former Jets teammate Robby Anderson, DJ Moore, and rookie Terrace Marshall.

The Panthers made the upside bet by bringing Darnold in. He’s always shown flashes, but he was one of the worst starting quarterbacks in the league over the past three years. A good season from Darnold could put the Panthers in the playoff conversation, as their defense should improve on a mid-tier season. A poor season would probably lose Darnold the job.