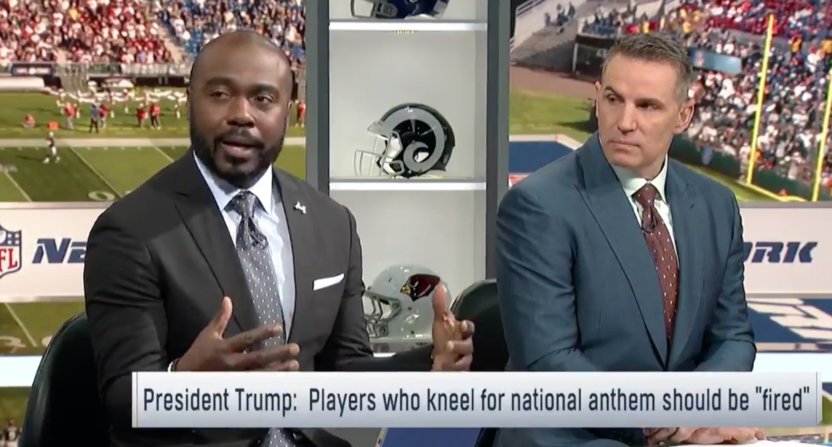 To the chagrin of the “stick to sports” crowd, the biggest story in the NFL on Sunday was deeply political. Since Donald Trump called players who kneel during the national anthem “sons of bitches” Friday night, protest has dominated conversation about and around the league. Owners have issued statements, players have sent angry tweets and sports television has had no choice but to go after Trump head on.

So on Sunday morning, as the Jaguars and Ravens got a day of protest underway in London, the studio shows on CBS, Fox and NFL Network discussed Trump’s comments and the league’s reaction.

On Fox, Tony Gonzalez had some strong words for Trump:

“I’m not surprised by this, the president’s remarks. We’ve grown accustomed to hearing this,” Gonzalez said. “But I will say this: All he did was galvanize the NFL to come together, from ownership to the players. And not even just football. This goes to every sport. Basketball, you’re seeing. Baseball.”

Added Colin Cowherd: “I think this is the opposite of what Trump intended, but I think it’s a wonderful thing we’re seeing around the league.”

"All he did was galvanize the NFL."
– @TonyGonzalez88 and the FOX NFL Kickoff crew share their thoughts on President Trump's remarks pic.twitter.com/JQCYTEs89P

“The president of the United States should never use the words ‘SOB.'” Barkley said. “But we as players got to figure out what to do next. We’ve got to stop worrying about who’s kneeling and who’s not kneeling. We’ve to figure out how we can go back in our communities and make a difference.”

Nate Burleson seemed to respectfully take exception to some of Barkley’s comments.

“We’re talking about what’s next, and I appreciate your thoughts on that, but as players we also have to handle what’s now,” Burleson said. “There’s gonna be players that will sit and will kneel… and it’s because of things that are going on in this country but it’s also because of the words of our president. … This is almost a direct response to our president calling our players, and I saw ‘us’ SOBs. And this isn’t, as a player, ‘woe is me.’ This is ‘woe is us,’ as a country.”

“This is a time of change,” Carroll said. “Our players are ready to activate. They’re ready to be the messengers of the change that is necessary for us. This is so crucial that we take this opportunity and make the most of it. Inequalities, treating people unfairly, treating people uniquely because of their background and where they come from is no longer OK.”

NFL Network also did not shy away from Trump on its pregame show, with several analysts speaking strongly Sunday morning. Marshall Faulk began the conversation.

“We find a way to be one, not just on this show but in this country,” Faulk said. “We put a lot of differences aside to make sure we can live together and enjoy this great country. And time and time again, divisive things are being said by our leader, the leader of the free world.”

(2 of 2): “That’s what the democracy is about. An American experience that’s better for all.

That is what this is about.”

Presumably, some people at each of these three networks would have preferred a football-focused show Sunday, but there was simply no avoiding Trump.