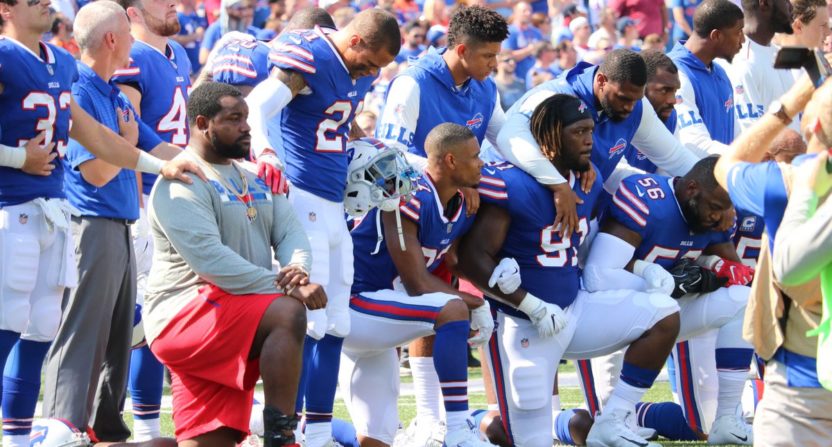 After Donald Trump called NFL players who protest during the national anthem “sons of bitches” and disinvited NBA star Steph Curry from the White House, we knew there might be a spike in athlete activism Sunday. But it was impossible to predict just how dramatically and decisively the NFL would rise up against Trump and in support of racial justice.

Following a barrage of supportive statements from team owners, numerous players either knelt, locked arms or raised their fists during the national anthem Sunday. It was the widest demonstration since Colin Kaepernick first made headlines protesting during the anthem last fall.

Here’s something close to a full list of the pregame protests that swept the NFL on Sunday:

Across the pond in London, the Jaguars and Ravens got the day started with mass protests on both sidelines. Several dozen players (along with former Raven Ray Lewis) knelt during the national anthem, as others either stood nearby or locked arms in a sign of unity.

27 players and staff took a knee this morning from the Jaguars and Ravens.

Most ever in one game. pic.twitter.com/Fv4rra9QJb

Jaguars owner Shad Khan, the only Muslim owner in the NFL, stood on the sideline and locked arms with several players in solidarity.

Pittsburgh coach Mike Tomlin told CBS before the game his team would not stand on the field during the national anthem, whether to make a statement or to dodge the kneeling controversy.

Steelers head coach Mike Tomlin reveals to @JamieErdahl that the team will not be participating in today's national anthem. pic.twitter.com/5zihPWQsMv

It turns out there was one Steelers player on the field, veteran Alejandro Villanueva.

Alejandro Villanueva served 3 tours of duty in Afghanistan as a Captain in the army. Only Steeler on the field during national anthem. pic.twitter.com/G7Dt33tki1

On the other sideline, Bears players stood arm in arm.

A group of Patriots players knelt during the national anthem.

Whole bunch of Patriots players are kneeling. There are some boos in the crowd pic.twitter.com/nLkc6TeQRh

Tom Brady is locking arms with his teammates pic.twitter.com/IbUjnlKGF2

Here’s what wide receiver Brandin Cooks, who comes from a family of veterans, had to say about the protest.

Brandin Cooks, who comes from a military family, had a very thoughtful explanation of why he knelt during the national anthem. pic.twitter.com/t6BFzIiznn

The Texans stood with arms locked.

All #Texans stand for anthem. Some Patriots kneel and are booed briefly. pic.twitter.com/zMeCLI4d7u

The Panthers did not seem to protest in any noticeable way.

Not. One. Single. Panthers. Player. Made. A. Statement. Today. pic.twitter.com/jHaPdOOqzF

Quarterback Cam Newton did speak out about Trump postgame, however.

Cam Newton on the President’s comments: “Some of the remarks were unacceptable.”

A collection of Saints players, meanwhile, sat during the anthem.

And wide receiver Brandon Coleman raised a fist after scoring a touchdown.

The Saints' Brandon Coleman raises his fist in the end zone after scoring pic.twitter.com/GfN94ndMFb

Two Falcons players knelt during the national anthem, as did eight Lions counterparts.

Strange times: As Anthem played, Jarrett/Poe took knee, prompting one fan not far from Falcons bench to yell, “Stand up or move to Canada." pic.twitter.com/DSGdxzVUXy

Many players on the Detroit @Lions took a knee today during the national anthem. ✊ #TakeTheKnee

Detroit’s anthem singer got in on the protests, taking a knee and raising a fist when the song was over.

Rico Lavelle just sang the national anthem in Detroit at the Falcons vs Lions game – then took a knee.#TakeTheKneepic.twitter.com/UrIocvdl0i

Philadelphia players, along with owner Jeffrey Lurie, stood arm in arm, and several others raised their fists as well. A couple New York players knelt or supported those who were kneeling.

Eagles standing with arms locked during the Anthem, owner Jeff Lurie on the field. Some Giants are kneeling; arms also locked. pic.twitter.com/kYs7XF7cS3

Odell Beckham Jr. raised his first after a fourth-quarter touchdown.

Odell Beckham raises his fist after scoring for a second time today pic.twitter.com/dy2G3mgEul

Took a knee with my hand over my heart to respect the men & women of service, past & present. Also with the realities of America in mind. pic.twitter.com/c4NqPUteO0

Malcolm Jenkins on @realDonaldTrump – he's like any other "troll" I come across on social media #Eagles #FlyEaglesFly pic.twitter.com/pnrcnPTxPD

Dolphins players are warming up in "I'm With Kap" shirts today.

A few Dolphins knelt during the anthem, while others locked arms.

The #Dolphins locked arms as a team & five members of the team – including 4 starters – took knelt during the national anthem. pic.twitter.com/kDFGa2igKc

Dolphins safety Michael Thomas got emotional talking about Trump after the game.

Dolphins safety Michael Thomas started breaking up when talking about Trump calling him "a son of a b!tch." pic.twitter.com/Z4wroPcvzW

Two of the Bucs’ biggest names, Mike Evans and DeSean Jackson, knelt during the anthem on Sunday.

Video: Bucs WR DeSean Jackson talks about his decision to kneel in protest during national anthem in Minnesota today. pic.twitter.com/U3ufP30ecK

On the other sideline, the Vikings locked arms.

Cleveland had a whole bunch of players taking a knee.

The Colts also had a large contingent of protesting players.

Here's a fuller look at the Colts who knelt during today's national anthem. Photo via Brian Spurlock @usatsimg. pic.twitter.com/859O7LihT3

The Broncos had maybe the most players kneeling of any team. The group included Von Miller, who became arguably the most accomplished player to protest in this way.

After the game, Miller called Trump’s comments “an attack on the National Football League.”

Buffalo running back LeSean McCoy simply continued stretching, as if nothing were going on.

The Seahawks have announced they will not take the field for the national anthem as protest against “the injustice that has plagued people of color in this country.”

Seattle’s opponent, the Tennessee Titans, will also stay in the locker room during the anthem.

The field was entirely barren of players.

Both the Titans & the Seahawks choose not to be on sidelines during today's National Anthem (? by @PJFOX17) pic.twitter.com/3m7nuImgju

The anthem singer took a knee after the song.

Thank you @meghanlinsey for this move. Taking a knee after singing the anthem at Seahawks-Titans. pic.twitter.com/ipnwx0nCUZ

One Chargers player knelt, while others sat on the bench during the anthem. The rest of the roster locked arms.

The Chargers locking arms during the national anthem. Melvin Ingram took a knee. Other players sat down. pic.twitter.com/V5ldQKfVq9

Several Chiefs players including Justin Houston and Travis Kelce knelt or sat, either on the bench or on the sideline.

Beautiful photo of Justin Houston kneeling during the anthem while several Kansas City Chiefs teammates take a knee in the background. pic.twitter.com/RUqqq0Hcqr

Martellus Bennett was among the Packers players to sit or kneel during the anthem. Others stood arm in arm.

Some Bengals locked arms, but none appeared to kneel.

Some Cincinnati @Bengals lock arms during national anthem in the wake of comments from President Donald Trump pic.twitter.com/16qGCw2Uzs

A few Redskins players including Jamison Crowder took a knee. The rest of the team locked arms, including owner Daniel Snyder. The Redskins tweeted a statement right after the anthem.

A statement from the Washington Redskins. pic.twitter.com/GsCMfWTZ7T

Almost every member of the Raiders sat on the bench during the anthem. One notable person standing was quarterback Derek Carr. Owner Mark Davis was in a suite standing with his hand over his heart.