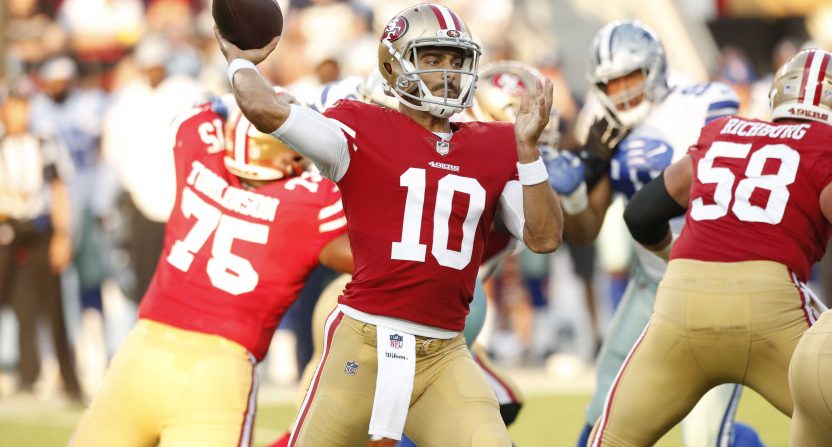 So you’ve decided to watch the National Football League. Congratulations! You’re an educated, discerning person. You’re not easily swayed by rhetoric or mumbo jumbo. You know the NFL is STILL entertaining and compelling despite its buffoonish commissioner, its many cowardly and unscrupulous owners, and its propensity to cause serious bodily harm to its vastly underpaid labor. You can ignore the Man in the White House who is simply still miffed because he couldn’t buy his way into the NFL.

For all the yammering about the player protests during the national anthem, guess what? Has it cost the owners actual dollars? No. Revenues are up way. Way up. The NFL took in a record $8 billion in national revenue. Yes, TV ratings are down, but they’re down across the board on broadcast television due to changing watching habits (streaming services). In comparison to everything else on TV, the NFL is doing fine. NBC’s Sunday Night Football was TV’s highest rated series for a record seventh straight year.

Look, the NFL does some shady things and the sport has problems it must address for its long-term viability. But if you think this cash cow is on the verge of collapse, go sell crazy somewhere else. This is the NFL in a nutshell: freaky former Carolina Panthers owner Jerry Richardson was forced by the league to sell his team following workplace misconduct allegations. He paid half of the $140 million expansion fee for the Panthers in 1993. The Panthers were sold for a NFL-record $2.2 billion.

America! What a country!

Chances are your team is lousy

We have bad news. If you’re a fan of one of the 32 teams that make up the NFL, chances are your team is meh at best and craptastic at worst. There are a lot of terrible teams out there. Last year, only 15 finished with positive scoring differentials as opposed to 20 in 2016.

The good news? Since there’s so much mediocrity, your team could still make the playoffs. Somebody has to be the fifth and sixth postseason teams in each conference. Your team could be this year’s version of last year’s Tennessee Titans (minus-22) or Buffalo Bills (minus-57). The Bills were the biggest frauds, needing a last-second win by Cincinnati over Baltimore just to sneak into the playoffs. According to the advanced metrics, that Buffalo team was worse than many of those that failed to make the playoffs this century.

And yes, Tennessee did upset Kansas City. In a one-game sample size, anything can happen. The Titans were not good enough to win multiple postseason games and were crushed at New England the following week.

How many legitimate Super Bowl contenders are there? Maybe eight: New England, Philadelphia, Pittsburgh, Los Angeles Rams, Minnesota, and New Orleans seem to be solid choices. If Aaron Rodgers stays upright, you can add Green Bay to the mix. Throw in Jacksonville if the defense remains great.

That leaves room for three mediocre teams to make the playoffs in the AFC and one in the NFC.  And of course, more playoff spots could open up if a key player from the upper echelon gets hurt. What makes the NFL difficult to predict are injuries coupled with the fact that the league is younger than it has ever been.

Maybe the L.A. Chargers survive their rash of injuries and finally get lucky.

Maybe having Ezekiel Elliott for the full season is enough for the Cowboys.

Maybe Andrew Luck can drag the Colts to success.

Or maybe the Chargers, Cowboys, and Colts simply make the playoffs because the rest of the NFL is full of bad teams.

Guys who still have something to prove

Jimmy Garoppolo – We know two things about Garoppolo. First, he has never lost as a starting quarterback (7-0). Second, my God, is he handsome. Garoppolo is so striking that even Tom Freaking Brady probably got jealous and forced Belichick to trade him. Garoppolo might be the best looking QB in the league. It’s either him or Cam Newton (That man has a beautiful smile).

Despite a small sample size, Garoppolo earned a fat contract from San Francisco. The deal makes him one of the highest paid players in the league. However, it also allows for some wiggle room for San Francisco to move on after three seasons if Garoppolo stumbles.

Garoppolo will be playing with considerable expectations for the first time ever.

Sean McVay – McVay looks like a ski instructor who’s being a little too friendly with your girl. He’s good at his job but do you trust him?

McVay is the NFL’s wonder boy. At 32 years old, he’s rocketed up the coaching ranks. He’s been lauded for fixing Jared Goff who looked incompetent as a rookie. McVay seems smarter and more progressive than most of his peers. He calls audibles directly into Goff’s headset. He rests his starters in exhibition games. And McVay has a photographic memory when it comes to recalling plays.

But the NFL can be humbling. McVay is going to be under a lot of pressure to deliver a Super Bowl run after the moves the Rams made in the offseason, acquiring wide receiver Brandin Cooks, cornerbacks Marcus Peters, Aqib Talib and Sam Shields, and defensive tackle Ndamukong Suh.

Odell Beckham Jr. – The only reason Beckham is on this list is because he’s coming off an injury. A fractured ankle sounds pretty serious for a guy who makes his living with his legs. What makes Beckham special is his otherworldly combination of speed, athleticism, and cartoonish hands. He is THE reason why Eli Manning has been able to stay reasonably productive over the past few season. Manning was not the same player when all of his wide receivers got hurt last season.

Yes, Beckham brings unwanted baggage. And he can’t seem to stay out of the tabloids. But the dude has 38 touchdowns in 47 career games. The Beckham slant might be the most unstoppable passing play in football. Assuming he returns to form, the Giants need him and have paid him.

Even a guy widely regarded as the greatest coach in his sport is not above criticism. And boy, Bill Belichick made some strange decisions:

Belichick gets a lot of credit – and deservedly so. But he’s also gift-wrapped a playoff spot every year because the rest of the AFC East is dreck. Eventually Tom Brady will get old. And eventually Belichick might make a decision that will signal the beginning of the end for the NFL’s top dynasty.

Sixteen things that may happen…