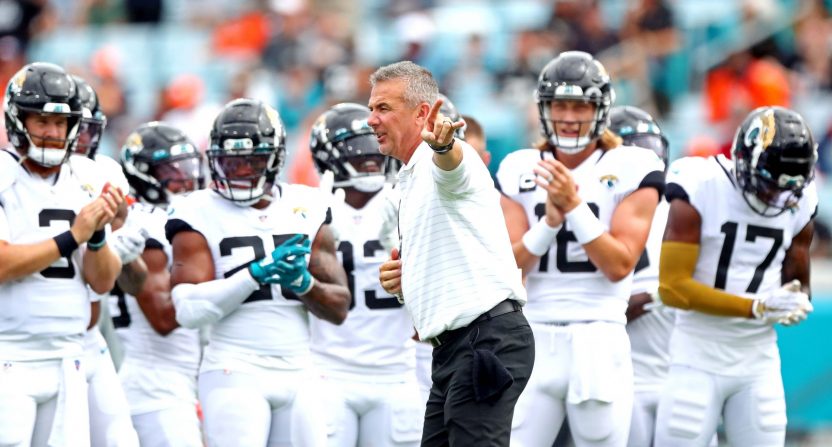 The Jacksonville Jaguars are hoping to win their first game in 20 tries on Sunday. One person who could really use a win is head coach Urban Meyer, who is coming off one of the worst weeks of his professional life. After a series of videos and photos of him at a bar went viral, everything spiraled behind a weak apology, a blunt statement by the team owner, and reports that some of his players weren’t happy with him.

Since then the dust has settled a little bit in the hopes that Meyer can coach the Jaguars for the foreseeable future as he attempts to regain the trust of those in the organization. However, according to sources that spoke with CBS Sports NFL analyst Jason La Canfora, the damage may already be done.

Many Jaguars coaches and players are shocked Urban Meyer is still in charge https://t.co/sFUntyg3j7

“He’s not coming back from this,” a league source who is very close to several Jaguars players told La Canfora. “There wasn’t much confidence in him in that locker room before this went down. Now? It’s over. Guys are laughing at him. He’s lost any respect he may have had. They think he quit on them.”

La Canfora also reported that a source close to the Jaguars staff said they felt betrayed that Meyer didn’t travel back to Jacksonville with the team following their loss to the Bengals and that they were “further blindsided” when the videos and photos emerged online.

“It was pretty gutless,” one staff member reportedly said. “He put (the assistant coaches) in a terrible situation.”

“You can’t make morality a central theme of your leadership message, and then do this,” an agent for a Jaguars starter told La Canfora. “It undermines everything. You can’t be holier than thou and do as I say and then do this. You don’t get up from something like this. These players see right through him. I can’t believe they didn’t fire him.”

All signs point to Meyer keeping his job for now, but if anything else happens off the field, or if the Jaguars simply quit on him, it’s hard to imagine he’ll keep his job much longer.