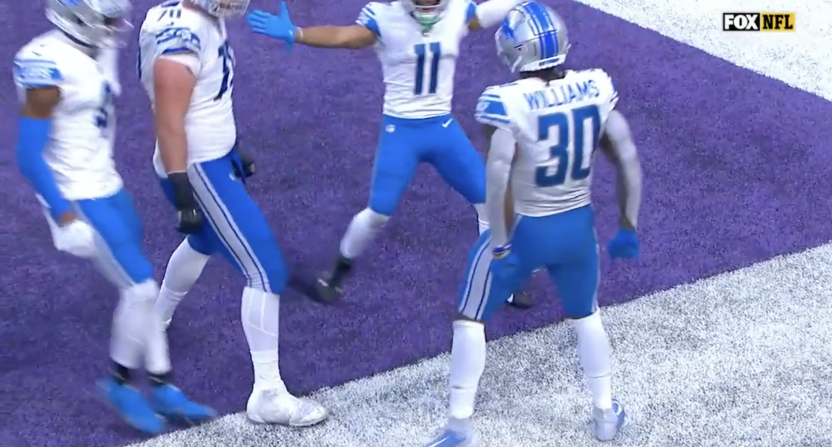 On Sunday afternoon, Detroit Lions running back Jamaal Williams had a dominant performance against the Minnesota Vikings, rushing for 87 yards on the ground while finding the end zone twice. But his most viral moment of the night didn’t come during one of his touchdowns, but after.

When Williams scored his second touchdown of the afternoon, he decided to turn the celebration up a notch. After crossing the goal line, Williams dropped the football and quickly started performing an absolutely wild celebration dance that included a series of hip rotations and pelvic thrusts.

It was definitely a bold decision to go all-out with the touchdown dance, but it was an absolute hit. The dance quickly went viral across the entire NFL world with many people comparing the dance to a popular Key & Peele skit.

Jamaal Williams got flagged for this

Michael Bennett would be proud… https://t.co/uNAHusFlwt

Unfortunately for Williams and the Lions, the game’s referees did not appreciate the performance anywhere near as much as the rest of the world. They threw a flag on the celebration, hitting Williams with a 15-yard penalty for unsportsmanlike conduct.

Williams didn’t agree with the penalty, saying “it’s not even thrusting. It’s more like a wave.” But even if it did earn a penalty, it was still one of the more memorable moments from the game.