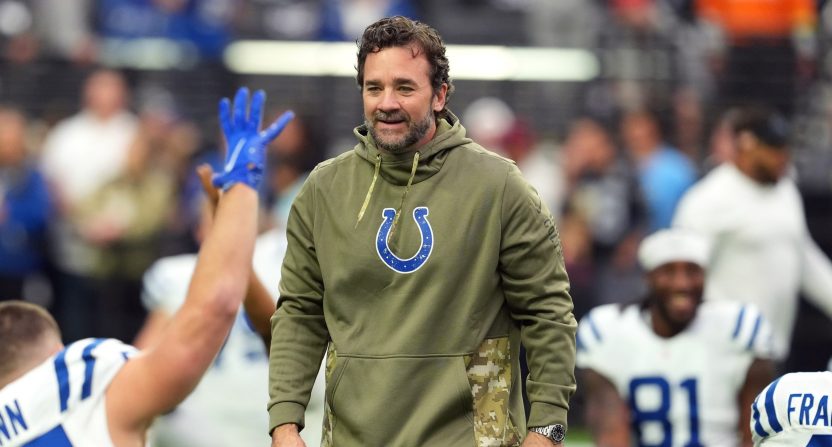 Most NFL owners are bad at hiring coaches. We know this because every year there’s so much turnover. Two coaches have been fired this fall, and there were already ten new coaches entering this season.

The oligarchy hasn’t been creative when it comes to assessing candidates. It’s often the usual suspects. However, one owner has dared to do something different.

The hiring of Jeff Saturday on an interim basis is one of the most shocking upper-management moves in recent history. Indianapolis Colts owner Jim Irsay, whose main qualification for his position is that he’s the son of Robert Irsay, gave a job to his friend with no previous experience. This brings new meaning to the good old boy network.

It also opens the door to a new kind of candidate: the former player who hasn’t paid any dues but is smart enough to have the ear of the owner. That’s simultaneously revolutionary and troublesome. Sure, in other sports we’ve seen guys with little or no experience get coaching jobs. It happens in baseball, such as with Aaron Boone of the New York Yankees. It happens in the NBA, such as with Steve Kerr of the Golden State Warriors (although, at least he was a general manager with the Phoenix Suns).

This has never really happened in the modern NFL. The job’s demands and complexity during the week and on gameday make it daunting. Even for those who seem well-prepared to be head coaches.

Now here comes Saturday. No experience? No problem. He’s 1-0 after defeating the Las Vegas Raiders. Most of the media are already using one game as a referendum. But criticizing or defending Saturday misses the larger point about the hiring process. Even if Saturday is “only” an interim coach.

Do you know who must be cheering loudest for Saturday? Probably Josh McCown. He was a candidate for the Houston Texans job last winter. Reportedly the Texans were very interested in naming him as their head coach but declined to hire someone with no experience.

That’s not an issue anymore. Not after what the Colts have done. And if you don’t think the Texans could boot poor Lovie Smith after one season, you haven’t been paying attention. The Texans fired David Culley after one year even though he had one of the league’s thinnest rosters. To replace him, they promoted Smith, who also doesn’t have much talent.

Houston (1-7-1) has the NFL’s worst record. Smith has already been fired by other franchises, the Chicago Bears and the Tampa Bay Buccaneers, so you could justify the move. However, if Smith is ousted, he would be the second straight African American coach that Houston has pushed out the door fast. The optics of that are truly terrible for a league that historically does a lousy job of hiring minorities.

A lot has been debated about Saturday and some ESPN pundits were taking a victory lap over their former colleague’s victory last weekend. Saturday could turn out to be a good coach. After all, somebody has to give you your first job. Irsay was generous; maybe he’s a visionary who sees something in Saturday that others don’t.

But Irsay’s decision could make the hiring cycle even more difficult for aspiring head coaches, particularly people of color. The rules keep changing. There’s supposed to be a process. Normally, you’re head coaching material if you prove yourself as a coordinator. Well, Saturday got a head coaching job before Kansas City Chiefs offensive coordinator Eric Bieniemy. You can’t reasonably defend that.

The so-called knock on Bieniemy is that many believe his success is due to Andy Reid’s system. Saturday went from an ESPN studio to the NFL sidelines. If you’re someone who looks like Bieniemy, that’s insulting.

How many other assistants are going to be bypassed because the owner wants to hire his buddy? Maybe this is a unique situation. Or maybe Saturday decides that being a head coach isn’t for him when the season is over.

It’s hard to give the NFL the benefit of the doubt. You can’t force owners to make fair and just decisions. You’d think by now owners would get better at the hiring process. They haven’t. And too many qualified candidates are paying the price.