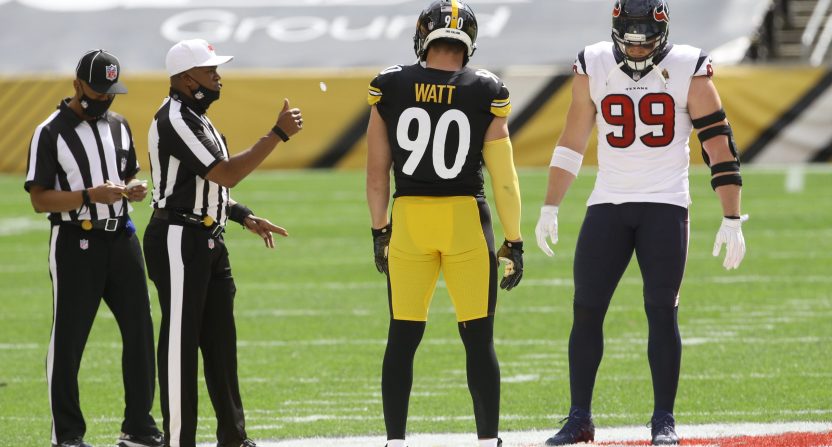 As the 2021 NFL season kicks off, Pittsburgh Steelers fans learned some very exciting news on Thursday afternoon. Star linebacker T.J. Watt has agreed to a four-year extension with $80 million in guaranteed money to remain with the Steelers. The full value of the extension is $112 million.

The deal, which gives Watt an average salary of $28 million per season, makes him the highest-paid defensive player in the NFL.

Sources: The #Steelers and star pass-rusher TJ Watt have a mega-deal. He’s going to sign a 4-year extension worth more than $112M — $28.003M average per year — with $80M fully guaranteed at signing. The highest paid defensive player in football. 💰 💰 💰

ESPN’s Adam Schefter. reported that Watt ended up overruling his own agents in order to get the deal done. His agents believed that he could get more money but Warr decided to visit personally with Steelers president Art Rooney II to agree to the extension. He then left to immediately get back to workouts.

Steelers’ OLB T.J. Watt overruled his agents who believed they could get more money today, marched into the office of Steelers president Art Rooney and told him they had a deal. Then the NFL’s new highest-paid defensive player excused himself and announced he had to go work out.

If it’s ok with Yinz, I’d like to stay a while!! LETS GO PITTSBURGH!!!! pic.twitter.com/itjnF7XNLd

Perhaps no one is as excited as T.J. as his brother J.J., who tweeted out a question about some unpaid debts. Wonder if T.J. kept his brother’s Venmo handle handy.

.@_TJWatt should I send those outstanding IOU’s to your accountant or do you want to just Venmo me?

Plenty of T.J.’s Steelers teammates chimed in as well with congrats.

I could Cry!!! Congrats fam! U deserve every penny!! I got to Pittsburgh your rookie year and you have done nothing but display professionalism and play at the Highest level in the league!!! Let’s get it brother SWAT!!! @_TJWatt !!!! https://t.co/h6Rme6dvAA

“This is a guy who was more than deserving of this contract,” Steelers defensive captain Cam Heyward told ESPN. “It’s great to know his future is here in Pittsburgh.”

Someone else who must be pretty happy is Ben Roethlisberger, who said this week that “T.J. should get whatever the heck he wants.” That appears to have been the case.