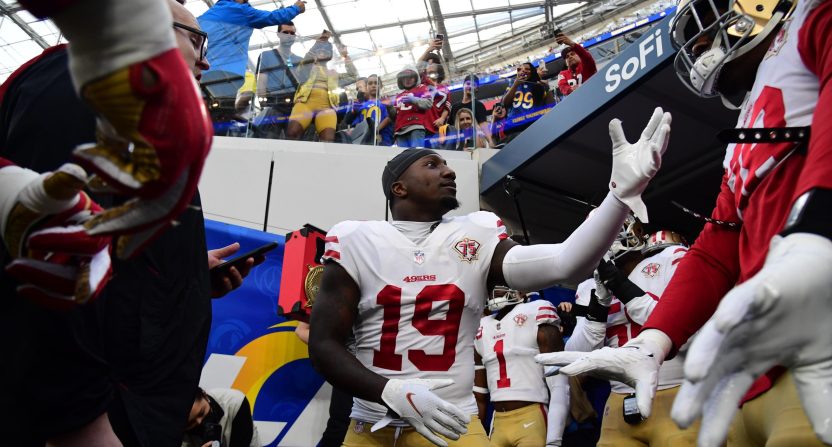 Samuel has demanded a trade and seems to have doubled down on that. Meanwhile, a report on Monday confirmed that the Niners have a specific asking price for the wideout. However, when asked about the situation at a press conference, Lynch said that he can’t imagine wanting to pull the trigger on a trade that sends Samuel out of town.

“I can’t ever imagine wanting to move on from Deebo,” Lynch said. “You put yourself through the exercises. Even though we don’t have a first-round pick, you have to be thorough in this process and prepare for everything, so you go through and do that. He’s just too good of a player.

“I think of 2019, that 36th pick, to come up with someone like Deebo, who has just been a game-changing player for our franchise. I told Deebo this: I think he’s the perfect illustration Herman Edwards used to talk about, when will meets skill, you’ve got the opportunity to be special. I think Deebo probably embodies that as much as anyone. He’s got tremendous will. He’s a very talented player. I think by virtual of the way he plays, it’s inspiring, so to me, that entails leadership. Do you make people around you better? He checks that box. He’s a great teammate. I think of things like prior to games, I get out there, and he’s always throwing the ball with the fans. I think he’s been a great member of our community. So, we’ve got nothing but love for him and nothing but appreciation for what he’s brought, but you just don’t let guys like that walk. I can’t envision a scenario where we would.”

Lynch said the team has been in contact with Samuel and that he is “confident we can find the solutions to work through whatever is going on.” He also said the team has no plan to trade him during the NFL Draft.