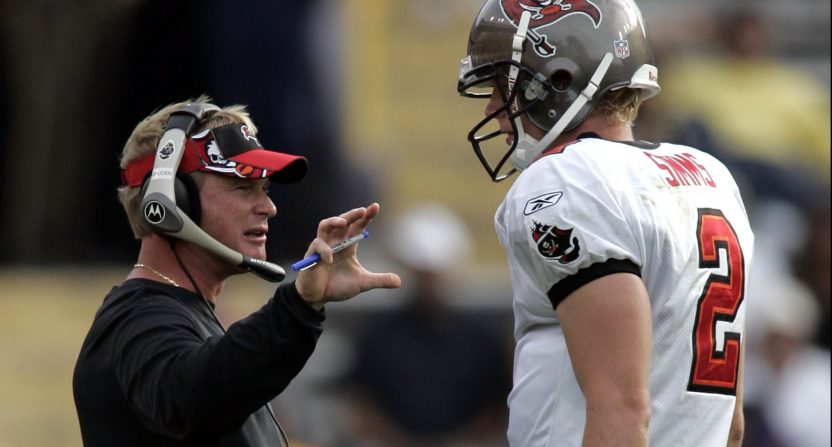 Aaron Rodgers’ fall to the Green Bay Packers in the 2005 NFL Draft remains one of the most shocking moments in recent NFL Draft history. ESPN posted an oral history of Rodgers’ fall, including quotes from several of the particulars (including Rodgers, through archived interviews).

One of the people quoted is former Tampa Bay Buccaneers head coach and current ESPN analyst Jon Gruden, who described not drafting Rodgers as “one of the greatest regrets in my lifetime”.

Jon Gruden, ex-Tampa Bay head coach: “I went and watched tape with Aaron. I can still remember it like yesterday. I watched tape with Coach Tedford and Aaron. Was really impressed in the film room and then we went out right there in the stadium. We walked right outside and started playing catch to loosen him up and then you look up in the stands and here comes this strange figure walking down the aisle and Aaron says, ‘Who is that?’ I said that’s our receiver. He says, ‘Well who is it?’ I said, ‘You’ll see.’ So it’s Jerry Rice. That was pretty good. That was a great day. I’ve still got the picture hanging right here at the FFCA [Fired Football Coaches Association]. It’s a memento of why I was fired. You can see one of the greatest regrets in my lifetime.”

Gruden and the Bucs took Auburn running back Cadillac Williams at #6. In six years with the Bucs, Williams totaled 3,677 yards and 21 touchdowns, with setting career highs during his 2005 rookie season with 1,178 yards and six touchdowns. He was actually the AP’s Offensive Rookie of the Year that season, but has been out of football since 2011.

The Bucs quite obviously needed a quarterback in 2005, and they ended up going into the year with Brian Griese as the starter before Chris Simms took over after the team’s Week 7 bye. Simms didn’t last as the starter, with Bruce Gradkowski getting most of the reps in 2006 before Jeff Garcia took over for both 2007 and 2008.

Gruden was canned after that 2008 season, and the Bucs went into 2009 with Raheem Morris as head coach and first round pick Josh Freeman eventually taking over under center from Josh Johnson and Byron Leftwich, who could best be described as stopgaps for Tampa Bay.

Since that 2005 Draft where the Bucs opted for Williams over Rodgers, Tampa Bay has drafted five quarterbacks and cycled through four of them (Gradkowski, Johnson, Freeman, and Mike Glennon), eventually settling on 2015 #1 overall pick Jameis Winston as their franchise option. They haven’t won a playoff game since Gruden led them to a Super Bowl XXXVII victory over the Oakland Raiders, and have only made two Postseason appearances since drafting Williams.

So yeah – drafting Williams over Rodgers was probably a mistake for both the Bucs and Gruden. But you didn’t need me to tell you that, right?