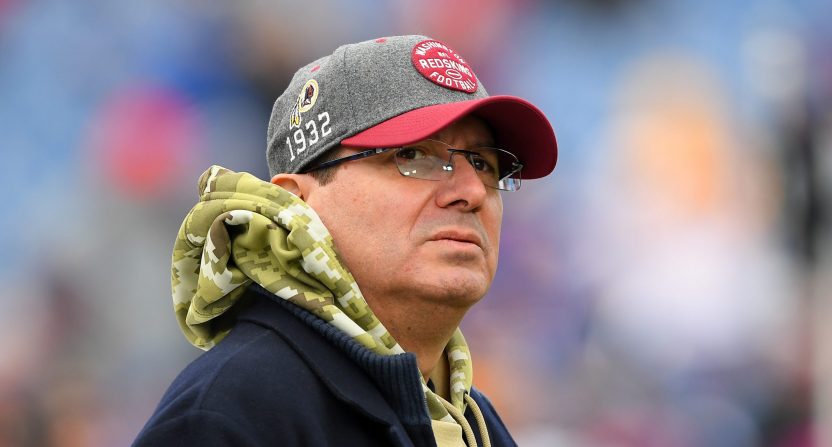 It’s important to remember that Jon Gruden’s emails, which subsequently led to him resigning as head coach of the Las Vegas Raiders on Monday, were part of a larger investigation. Specifically, those emails are just a few of the 650,000 emails collected as part of an investigation into the Washington Football Team over workplace misconduct related to secretly filming cheerleaders and other forms of harassment.

Originally, the NFL announced in July that they had concluded the investigation and fined the franchise but didn’t provide any details or transparency about what they found. They even made the announcement on July 4 weekend in order to mitigate interest in the topic any further.

However, now that the Gruden emails have been leaked, it begs the question of whether or not more emails are coming. And if that’s not the plan, why not? The main assumption is that the league found some pretty incriminating emails in there from owner Dan Snyder or former general manager Bruce Allen and they have a vested interest in keeping that information quiet, lest other team owners find themselves in similar predicaments. That Gruden, who wasn’t even a reason for the investigation to happen, is the only person to have landed in trouble because of what was uncovered, speaks to where the power remains here.

Given that Allen was at the center of much of the issues that led to the investigation, many people think that, at the very least, his emails should be released. And among those, any exchanges between him and Snyder should be made public as well.

I keep waiting for the other shoe to drop in this Gruden fallout. Specifically, I want to know more about Bruce Allen, who I covered during his tenure in Tampa Bay. In all my years, one of the absolute worst people I’ve dealt with in my coverage of sports.

Also fascinating: How quickly the Gruden emails have become public, while the all aspects of the league’s investigation into Dan Snyder have remained completely private.

Lesson for everyone in the difference between the people who cash the checks, and those who write them.

If Jon Gruden was sending all those bigoted, racist & misogynist emails to Bruce Allen, how was Allen responding them??

John Gruden deserved his fate, but I find it awfully convenient that his emails and his alone were the only one's leaked in an investigation that reportedly reviewed over 650k including those of WFT Owner Dan Snyder. I find that pretty, pretty interesting.

According to the @WSJ, the NFL reviewed 650,000 emails during its investigation into the Washington Football Team's workplace culture.

Either Jon Gruden had the only offensive emails within the 650,000 or – far more likely – his were the only ones ownership ALLOWED to come out.

If the NFL has its way, and especially if Dan Snyder has his way, those other emails will never see the light of day. However, we know that the New York Times is on the case and other media organizations are certainly sniffing around. It might just be a matter of time before we see just how deep, and gross, this rabbit hole goes.