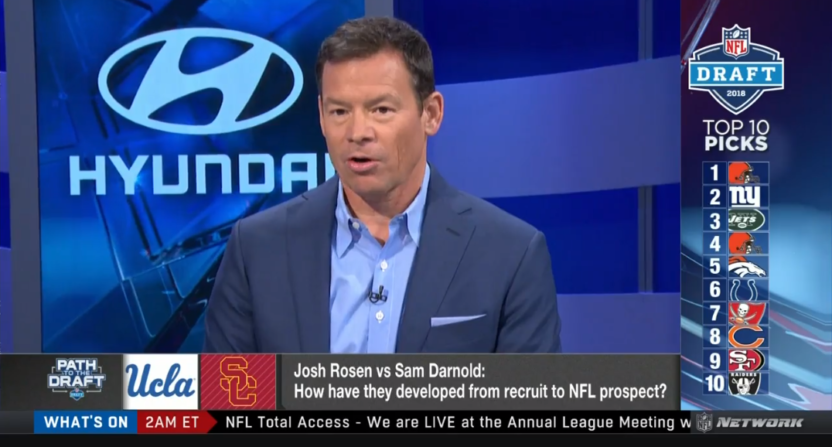 Even after acquiring Tyrod Taylor in a trade with the Buffalo Bills, the Cleveland Browns are still expected to draft a quarterback with the first or fourth overall pick in April’s NFL Draft.

Many evaluators think that UCLA’s Josh Rosen is the top quarterback prospect in the draft, and The Comeback’s Brad Gagnon indeed has Rosen being the first quarterback selected (by the New York Giants at No. 2) in his latest mock draft.

Former UCLA head coach Jim Mora (fired in November) appeared on Monday’s edition of NFL Network’s Path to the Draft, and was asked which quarterback the Browns should take (specifically at No. 1 overall): Josh Rosen or USC’s Sam Darnold?

And Mora went with… Darnold. Huh?

“Because of fit, I would take Sam Darnold if I were the Cleveland Browns. I think [he has] that blue-collar, gritty attitude. I think his teammates will love him. I think the city will love him. He’ll say the right things. He’ll come in and represent well. I think he kind of represents what Cleveland is. And then if I was one of the New York teams, I’d take Josh like that [immediately]. I think they’re both going to be great pros.”

So, Mora specifically said he thinks Darnold should go to Cleveland “because of fit,” and said that the Giants or Jets should then draft Rosen immediately in the ensuing picks. And he said he thinks they will both be great pros.

Mora even went on to say during NFL Network’s NFL Total Access that he thinks Darnold-Rosen could be like the Brady-Manning debate down the road (via NFL.Com):

“I think some day hopefully we’re talking about the Peyton Manning-Tom Brady debate. Which one’s better? I think both of those guys can be those types of guys,” Mora said during Monday’s Total Access.

It’s still odd that Mora wouldn’t immediately clamor for his star quarterback of the last three years to be the top overall pick, regardless of fit. It’s even more confusing when you consider that two years ago, Mora said that Rosen would’ve been the No. 1 overall pick in the NFL Draft  *as a freshman*:

“In my opinion, he was the best quarterback in the draft and he would have gone first,” Mora said. “I know that is really a strong statement for a true freshman, but I’ve never – I shouldn’t say never, I’ve been around Peyton [Manning] when he was that age – I can’t remember ever seeing anyone at his age with the arm talent, the intelligence, the decision making, the drive, the passion and the ability that he has.”

Of course, maybe Mora is just trying to do his best to help prevent Rosen from being a Cleveland Brown. Yeah, that’s probably what it is.