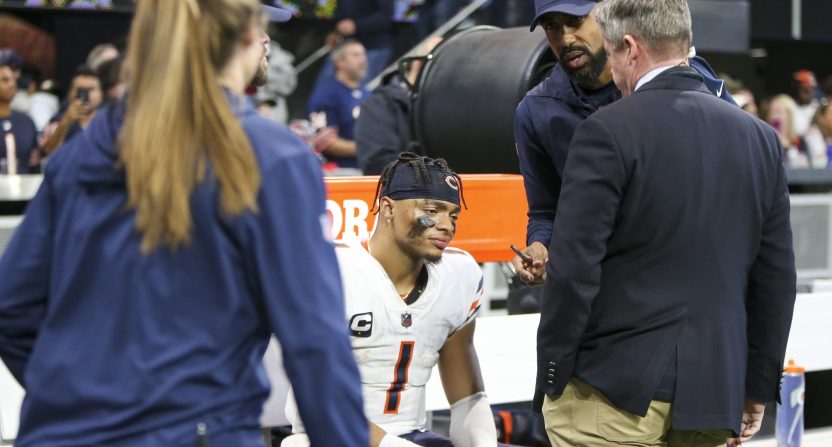 There aren’t too many people on Zach Wilson’s side these days after the young quarterback reportedly rubbed his teammates the wrong way by not taking responsibility for his poor play. The bad vibes only intensified after a report broke about how Justin Fields handled a similar situation in Chicago.

While many are arguing over the New York Jets quarterback and whether or not he has the maturity needed to succeed, NFL reporter Albert Breer shared an anecdote about how Fields apologized to the Bears’ defense following their loss last weekend.

“Bears QB Justin Fields apologized to his teammates after Chicago’s loss to the Falcons in the locker room postgame,” wrote Breer. “Told them the defense gave the offense a chance, and the offense didn’t get it done. Went a long way with guys, after he’d played hurt.”

Breer then added that the defensive teammates stopped Fields and told him “they had his back.”

My understanding is Fields' defensive teammates stopped him as he was finishing the apology, told him they had his back. Really cool moment for everyone there, and a nice sign of where Matt Eberflus has taken the culture in Chicago.

The whole thing seemed to say a lot about the state of the locker room in Chicago. The same cannot be said for New York, where head coach Robert Saleh won’t commit to starting Wilson next weekend. Saleh did sorta defend Wilson, saying that he just didn’t articulate himself well when discussing his poor performance against the Patriots.

“I don’t think it’s indicative of how he feels about his team or teammates,” Saleh said. “I don’t think he is naïve to the fact that offense wasn’t played to the best of their ability.”

Regardless, a lot of people around the NFL world had some strong reactions to the anecdote about Fields and how it reflected on Wilson, especially considering the Jets drafted Wilson over Fields.

Guess what, folks: It's happening. https://t.co/VL6G1ThVaa

We may wonder how 10 players were drafted ahead of Justin Fields for a long time. https://t.co/meSYq1UxEq

I love this man. Dislocated shoulder, but took the brunt of the blame. Imagine drafting a QB in the first round and he cant hold himself accountable. Couldn't be us https://t.co/0UTF63vuqa

There's a quarterback in New York who should take some notes here. https://t.co/FcEPnJcUuq

Now, this is what you want from your quarterback. https://t.co/HCLW2c5IfS

A far cry from the Zach Wilson postgame presser "No" heard 'round the world. https://t.co/gjRbxeoyhS