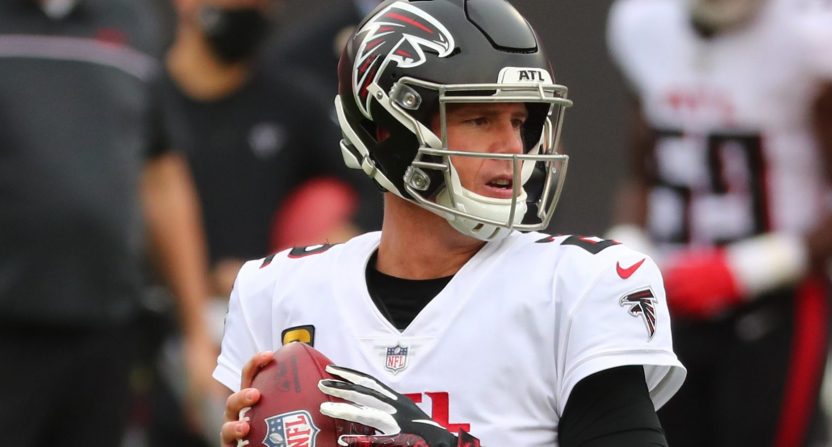 Part of what’s interesting about the blockbuster March trade that saw the Atlanta Falcons send Matt Ryan to the Indianapolis Colts for a third-round pick (which they used on Western Kentucky Hilltoppers linebacker DeAngelo Malone) is that it appears to have been spawned by a move that didn’t even come to fruition. That would be the Falcons’ pursuit of Deshaun Watson, who wound up traded to the Cleveland Browns. Ryan (seen above in a January 2021 game) addressed that on The Ryen Russillo Podcast this week: here are some of the key things he said, via NFL.com’s Nick Shook.

“I kind of got filled in to the loop that they were gonna look into Deshaun Watson. At that point, I said, ‘Okay, I understand,’ you know, but I also need to look into what I need to look into, and if this doesn’t go down, find out if this is probably still the best fit for me. And as that week went on, and I just kind of looked into — on my end — what might be the best possible landing spot, or what was best for myself and my family moving forward. As we did that research, to me, it became one spot.”

…”Um, you know, had none of this gone down, there’s probably a chance,” Ryan said when asked if he’d still be a Falcon had Atlanta not pursued Watson. “A pretty good chance. But it did, you know, and so when it does, when the situation is changed, when the circumstances change, you know, I had always thought — like everybody — when you’re drafted there and you play there, this is where I’m going to play my entire career.”

“(For) 14 years, every day I woke up to try to help the Falcons win a championship. And that had been reciprocated on the other end for me. And so, when that changed, I had to look into it, and it’s certainly been a big change for sure, but a good one. So, it’s hard to say, but I think honestly, you know, it’s more than likely I probably would’ve still been there if circumstances had been different. But I’m excited with where I’m at.”

It’s notable that there isn’t really a lot of obvious bitterness here from Ryan, but more of a discussion of why this played out the way it did. And this may wind up being a move that benefits both the Falcons and the Colts. The Colts were 9-8 last year (with a +86 point differential) and have a strong defense, while the Falcons went 7-10 with a -146 point differential and seem a little further away from immediately competing.

But after trading Ryan, Atlanta selected Cincinnati Bearcats quarterback Desmond Ridder in the third round of this year’s draft, and they’ll now be looking to figure out if he’s their quarterback of the future. And that may work out better for them than even landing Watson (which cost the Browns three first-round picks, a third-round pick, a fifth-round pick, a massive contract extension, and waves of public criticism). Meanwhile, the 36-year-old Ryan has wound up in a place where he would seem to have more of a shot at a playoff berth this year. We’ll see how this works out for both sides in the end, but it’s significant to hear Ryan talking about how it was triggered by a Falcons’ move that didn’t actually happen.